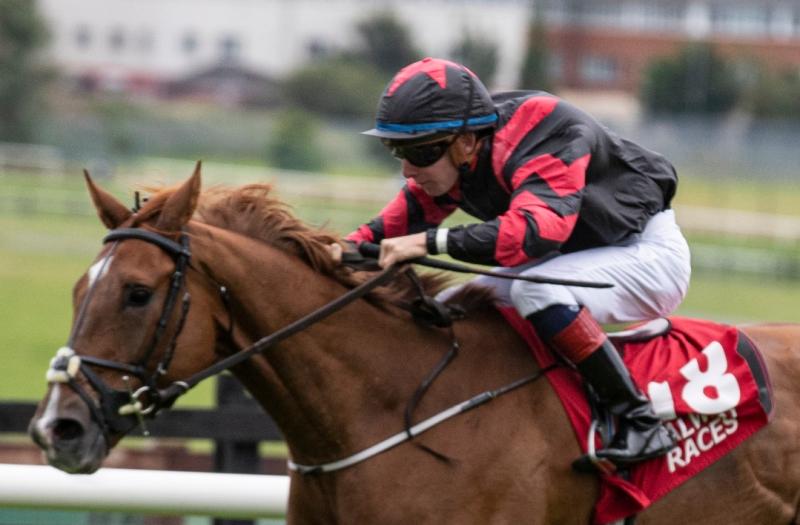 RATHKEALE jockey Conor McNamara notched up a couple of notable winners when landing a double at the Galway festival on Friday evening last.

He won the evening’s feature race, the two-mile seven-furlong handicap hurdle on the Willie Mullins-trained Jazzaway. The six-year-old picked up well after the final flight under the Rathkeale jockey and got up in the dying strides to pip the Declan Queally-trained Western Victory by a head. The 9/1 winner carries the colours of the Whitegrass Racing Syndicate.

Earlier, McNamara partnered the 60th winner of his career and rode out his claim when successful on the Annette Mee-owned and Shark Hanlon-trained Hallowed Star in the Adare Manor Opportunity Handicap Hurdle.

In a very similar conclusion to the race, the 2/1 favourite again finished with a flourish to deny another Queally runner in the shape of Ashqar by half a length.

Shanagolden jockey Chris Hayes was among the winners at the Galway festival on Tuesday where he won the second of the eight-furlong handicaps on the Sheila Lavery-trained Moddy Poddle. He made all the running on the 9/2 chance from stall three and he had a very willing partner which battled well to see off the sustained challenge of the Dermot Weld-trained 5/2 favourite Baseman by half a length.

Hayes recorded the same winning margin as the Tom Gibney-trained Imposing Supreme became the first horse to win two races at the festival when successful in the seven-furlong handicap on Sunday. The strong 2/1 favourite hit the front inside the final furlong and beat the Kieran Cotter-trained Fridtjof Nansen by half a length.

Gibney said, “That’s brilliant. Getting in was the hard part. He came out of Tuesday’s race as well as I’ve ever seen him and gave us huge confidence for today. Chris gave him a great ride, it panned out lovely and you couldn’t ask for anymore.”

Moyross jockey Wesley Joyce will long remember the 2021 Galway festival as he landed a terrific success on the Emmet Mullins-trained Crowns Major in Saturday’s feature race.

He produced a wonderfully assured performance to win the €100,000 Galway Shopping Centre Handicap over 12 furlongs on the 7/1 chance, sitting just off the pace and delivering a perfectly timed challenge early in the straight to record an impressive two-length win over the Ross O'Sullivan-trained front-runner Longbourn.

Mullins commented, “It was a brilliant performance, especially from Wesley here in Galway around a tricky track in a big handicap like that. He was very cool on him and we’re delighted.”

Of his sixth career winners, Joyce added, “He jumped very smartly from the stalls and I sat behind the leaders as I thought they were going a bit quick. I said I’d let them go on and give my horse a breather. He won with a bit in hand and he’s a very nice horse.”