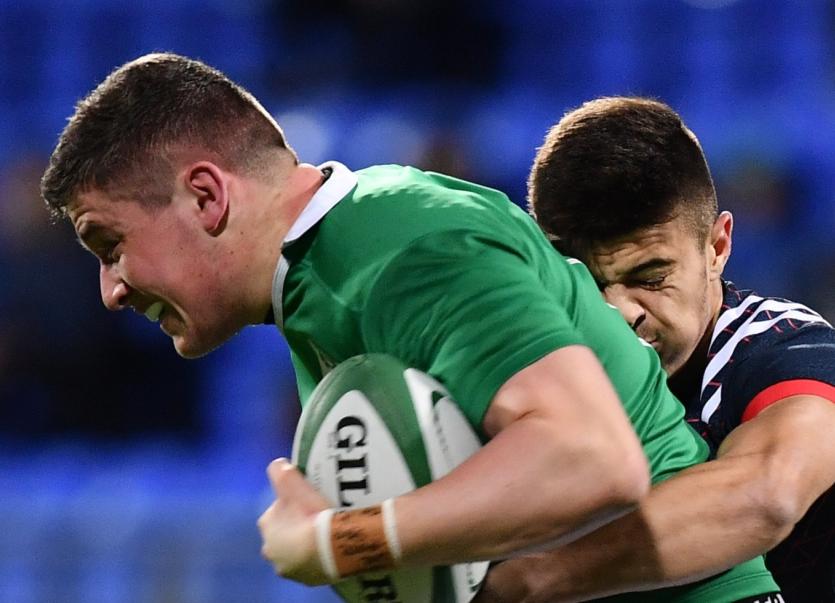 Joey Conway in action for Ireland U20s against France at Donnybrook

A TALENTED Limerick prop, who has represented Ireland at U20 level, has signed for English Championship side Bedford Blues.

Loosehead prop Joey Conway, from Castleconnell, has joined up with Mike Rayer’s Bedford Blues squad for the 2021/22 Championship campaign.

The 23-year-old has experience playing against Bedford, having featuring for Munster A in the sides'  2017 British & Irish Cup tie.

Conway spent several years in the Munster age-grade set-up winning interprovincial titles with both the U18s and U19s. A further spell with the U20s/Development side and the Academy also helped his progression.

He featured prominently in the Irish U20s side in 2017, playing in four of their Six Nations matches and featuring in the World Championships later that year.

Most recently starring for UL Bohemians in the All-Ireland League – where he made his first steps into rugby and has been captain for the past two seasons – Conway also represented Castletroy College in his formative years where he won a Munster Schools Junior Cup.

Discussing his move, Conway said: “I’m delighted to be joining Bedford Blues and experiencing the Championship for the first time.

“Everyone speaks so positively about what it’s like to be at Goldington Road on a Saturday afternoon and that’s something I’m really looking forward to next season.

| “Alex Rae has huge amounts of experience in this league, both as a player and a coach, and I can’t wait to start working with him.”

“Alex Rae has huge amounts of experience in the league, both as a player and a coach, and I can’t wait to start working with him. The Championship is an extremely competitive and tough division, but I’m really excited about testing myself.”

Head Coach, Alex Rae said: “Joey arrives with a bit of pedigree having come through the Munster system. His pathway in rugby probably didn’t go the way he would have liked, going back to club rugby in Ireland, but he captained the side from a young age which shows his leadership qualities.

“For a loosehead prop, he’s got x-factor around the field as well; but he’s fully aware that his bread and butter is going to be within the set-piece.

"He’s got some unique characteristics which really caught our eye, the Championship is going to be a real good learning curve for him, and will definitely improve him further.”