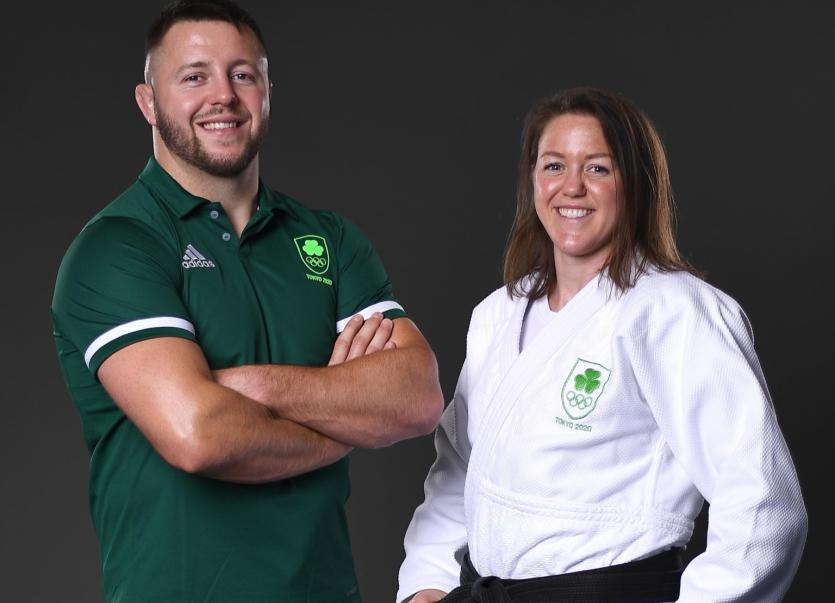 Ben and Megan Fletcher during a Tokyo Team Ireland Announcement for Judo at the Sport Ireland Institute at the Sports Ireland Campus in Dublin. PIC: Sportsfile

THERE were celebrations in south Limerick this Wednesday morning when the Irish Judo team was confirmed for the Olympic Games in Tokyo.

Siblings Megan Fletcher and Ben Fletcher have been officially selected on the Judo team who will be competing at the Olympic Games in Tokyo in the Nippon Budokan on July 28-29.

Both were both in England, west of London - in Wokingham, Berkshire but qualify for Ireland through their Limerick mother.

Alice Mary Keating left Bruff in the 1960s as a seven year old when her family emigrated to Reading. Now 60 years later, her son and daughter will flag the Irish and Limerick flag in Tokyo later this month.

29 year old Ben Fletcher is a Rio Olympian, having previously competed for GB, has had a dramatic roll into his second Games. He broke his leg in two places in February. Fortunately, his strong position going into 2020 ensured he held onto his ranking position by the close of the qualification window.

First time Olympian Megan Fletcher fights in the -70kg category and is looking forward to competing in Tokyo after what has been a challenging year,

“Being selected for the Olympics means the absolute worlds to me. I am so proud to have made the Irish team and to be flying the flag at my first Games! It has been such a long road to this point, and I couldn’t be more excited to get over to Tokyo and fight now," said the 31 year old on confirmation of her place in Tokyo.

Megan has a world ranking of 20 and an Olympic ranking of 14. She is only the second women to represent Ireland in Olympic judo after Lisa Kearney (2012).

In 2019 she made the podium at the Marrakech, Tel Aviv and Montreal Grand Prix and was seventh at the European Games in Minsk.

She usually trains at Bath University but Covid forced her to train, with her brother, at their home club in Wokingham and at the Sports Institute of Northern Ireland.

Ben Fletcher has a world ranking of 21 and an Olympic ranking of 15. He is a former world junior bronze medallist. The multiple Grand Slam and Grand Prix winner has represented Ireland since 2017.

He started 2018 by winning gold at the Tunis Grand Prix, the first Irish judoka to ever win an IJF World Tour event. In 2018 he won silver at the Dusseldorf Grand Slam and bronze at the Antalya Grand Prix. In 2019 he had three top three Grand Prix finishes (Tel Aviv, Marrakech and Hohhot) and won bronze at the Grand Slam in Baku.

In February 2021 he broke his leg in two places in competition in Israel yet has managed to return in time for his second Olympic Games. He competed for Great Britain in Rio where he finished 17th.

Team Ireland Judo Team Leader Ciaran Ward said: “This is a watershed moment for us in Irish Judo, it’s the first time we have qualified two athletes since global qualification started. It’s a generation since we had this size of a team and it’s the first time we have had both men and women represented at the Olympics, so it’s a first for Irish Judo, and we are very proud of both of them."

He added: “Judo is the national sport in Japan, and is the sport that produces most medals for them normally at the Olympic Games. They are the benchmark that we all try to achieve. Usually in Japan there’s a full stadium of spectators who all know their sport, which will be different this time around.”

Today's Judo confirmation was the final team announcement for Team Ireland, with the overall number of athletes consisting of 116 athletes, as well as an additional 11 ‘P’ athletes or reserves.

The Olympic Games in Tokyo will run from July 23 to August 8.