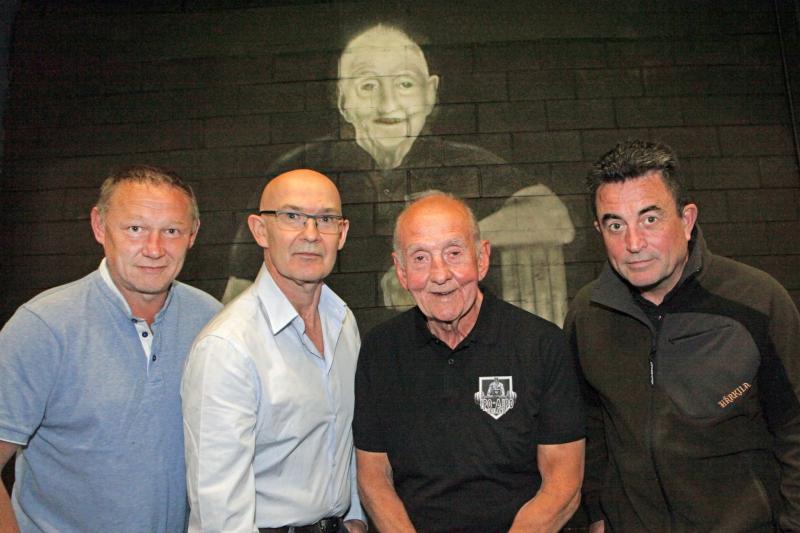 Paul Dillon, Greg Dillon, Tommy Dillon and Mike Constable at the unveiling of the new mural at Southside Barbell LPC

SOUTHSIDE Barbell - LPC, have had a mural painting unveiled on the club wall to honour one of Limerick's and Ireland's greatest powerlifting legends Tommy Dillion.

The mural will be a reminder to the new younger upcoming generation of lifters of the history of Irish powerlifting, the stories and of where it all begin.

Tommy Dillon began his powerlifting journey back in late 1960's training out of the Garryowen Weightlifting Club.

By the early 1970's he won his first title, the Munster junior powerlifting championships.
Tommy very quickly started to dominate in both powerlifting and bodybuilding, winning many titles.

Tommy has won many powerlifting international European and World titles across a number of different federations and competed up until the age of 75 where he had to stop due to health reasons. Tommy has served as President of the IPO and in his early years he was President of the IPF for over a decade.

Tommy Dillon lived in Southill with his wife Susan and family for more than 40 years where Tommy ran the famous Southill Powerlifting Club known worldwide in the powerlifting community.

Tommy was a massive part of the Southill community and inspired so many young teenagers, coaching and giving them guidance.

He was coach to numerous world champions, he put the Southill community and Limerick on the map.

On many occasions, Southill Powerlifting Club featured on news stories and programs highlighting how successful the club and its members were and of their many achievements.

Tommy has achieved so much in his life. He committed to the sport of powerlifting while also giving so much back to others, it has never gone unnoticed.

He has been a outstanding coach and mentor but most of all a true friend to me.

The mural painting of Tommy at Southside Barbell on the wall of the club is to honour Tommy. The impressive new mural was done by local Limerick artists Shuk. @shuk_graffiti_artist