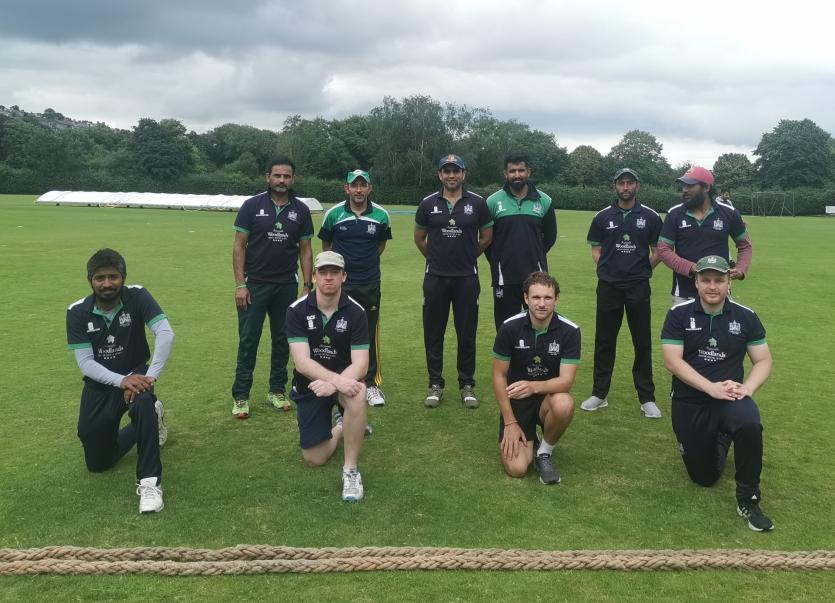 The Limerick Cricket Club's first Xi before their game on Sunday

LIMERICK Cricket Club had one chance to restore some pride in their final game of T20 Blast at the Mardyke last weekend.

With any chance of winning the blast diminished from last week’s results, Limerick were looking to end the T20 campaign on a high to try carry some momentum into the next weekend’s 50-over league opener.

Limerick won the toss and elected to bat as some early morning showers gradually began to debilitate with a slightly slower outfield than usual. There were two changes to the starting XI with Hashir Sultan and Asif Hussein into replace Usman Khan and Sarfraz Ramay.

Early confusion in the middle left left-hand opener Tim Smithies scrambling back into his crease but the home side’s fielding was flawless in this instance and Limerick were one down at the end of the third over.

Limerick found themselves in deep trouble when 32-1 became 33-4 in just a matter of minutes with some big pressure being transferred to the middle order. Things went from bad to worse for the away side as the boundaries dried up and a scorecard with just 75 runs at the turn of the final five overs did not make for friendly reading.

However, Farman Yousafzai was able to conjure up a response to the home side’s bowling attack. A flurry of big hitting from Yousafzai, which included 4 6’s in one over, brought Limerick back into the game as his 63 off just 42 deliveries clawed Limerick up to the respectable total of 128-8 at the conclusion of the twentieth over, a total they had defended before in the past.

Limerick created a lot of early pressure with the ball which began to pay dividends and bring the away side back into the game. It was the familiar faces of Shani Alam and Arslan Anwar who chipped away with crucial wickets in the middle overs to keep the home side nervous as they chased what would seem to be an attainable total.

County chased in similar style to Limerick’s innings as they kept themselves more or less on par with the run rate. With the dismissal of Alex Gasper at 75-6 after 13.3 overs, the Manhattans were of a similar appearance for both sides as County needed 53 off just over 6 overs.

County’s seventh wicket partnership proved the difference as the Shannonsider’s couldn’t find the last wicket they were looking for to stem the home side’s momentum. County would chase down the total with five balls and four wickets to spare as Limerick concluded their T20 season in fourth place.

As previously said, Limerick will start their limited overs campaign next Sunday in the Mardyke again against County in what is sure to be a tasty encounter as Limerick will look to get off on the right foot to retain the MCU Senior League.

Incidentally, the Limerick 1st XI would be the only team in the club to lose their game this weekend, with Limerick picking up six out of seven wins in all competitions.

THE Limerick 2nd XI made a miraculous comeback in Tralee on Saturday making 16 runs off the last over to steal a victory and keep them in the running for a shot at the Div 1 T20 title.

There were comprehensive wins for the Limerick 3rd and 4th XI in Cork yesterday, Dharmesh Patel and Jatin Jaitley lead their sides to comfortable victories, Yogesh Borghare (57*) ensuring a nine wicket thrashing of UCC for the fourth team who are now pushing for a title shot against their own third XI side.

Prithiv Mohan stole the show for the Limerick 5th XI with an incredible performance with the ball. Mohan almost broke the club record when he took seven (yes seven!) wickets against Cork Harlequins, with figures of 7-12 earning him his second engraving on the club’s Honour’s Board.

His side would go on to claim a 110 run victory to keep them at the top of the Division Three table. Ironically, it is the Limerick 6th XI who are keeping pace with the table-toppers.

They picked up a comfortable nine wicket win in Kerry on Saturday to keep them in second place, Thanushan Rajendrarajah’s 59 not out proving too strong for Kerry who had their 118-run total chased down in just the 14th over.

Last but not least, it was a massive win for the Limerick u15s who beat Galway by 5 wickets yesterday in their first game of the year. Galway made 96 with the bat as Eshan Tanveer, Skandan Lakshmanan, Ayan Ullah and Cormac Welch picked up wickets for the away side.

It was the familiar face of Alan McCutcheon who delivered once again with the bat in Limerick’s run chase. His 24 off 31 balls amplified Limerick’s run rate and got them within touching distance of their total. McCutcheon would be dismissed with the Limerick middle order of Zaki Khalid and Riahan Ullah ensuring victory for their side.