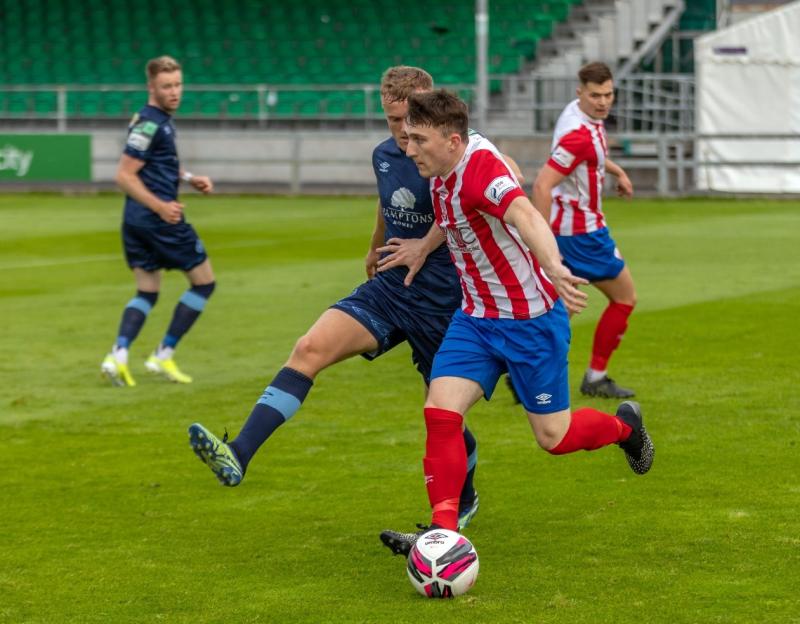 TREATY United struck at the death through substitute Willie Armshaw to earn a dramatic 1-1 draw with leaders Shelbourne in their SSE Airtricity League First Division fixture at the Markets Field.

However, former Limerick FC U19 player Armshaw from Cappawhite, had other ideas, collecting possession outside the penalty area following a half cleared corner before firing a terrific effort high into the left corner of the net in the 93rd minute.

It was a sensational strike from a player who has been in the habit of making big contributions late on in games this season.

Michael O'Connor's clinical finish for the visitors mid-way through the second half was the difference between the sides until that point and looked all set to see Shels' extend their winning league run to nine games.

Tommy Barrett's in-form Treaty side have now taken 13 points from a possible 18 in their last six league fixtures.

It was the second league draw between the sides this season after their 2-2 stalemate in Tolka Park in April when a 97th minute goal from Treaty's Clyde O'Connell denied Shels from taking all three points.

Treaty Utd host UCD at the Markets Field next Friday evening next, 7.45pm, as third play fourth in another crucial fixture.

Treaty came into the game in third place in the table, following a run of four wins in their previous five league outings.

For Treaty, Joe Collins started in midfield, while Tadhg Ryan and Jack Lynch returned to the starting XI after injury.

Shelbourne enjoyed a good deal of possession in the opening 20 minutes, but opted to play crosses and diagonal balls into the home side's penalty area rather than try and play through Treaty Utd.

At the other end, Treaty did create a couple of half chances, but were unable to force a clear-cup opening.

The business opportunity of the opening half arrived in the 37th minute to full-time side Shels. The Dublin broke quickly and created a two on one.

The influential Michael O'Connor set up Jonathan Lunney who looked set to score. However, the quick-thinking Tadhg Ryan had other ideas, advancing quickly from his goal to close down Lunney, before smothering the shot on goal. It was an excellent piece of goalkeeping

Soon after Treaty Utd captain Jack Lynch looked to score with an audacious lob only for the effort to be collected by former Limerick FC netminder, the vastly experienced Brendan Clarke.

Just before half-time, Kevin O'Connor's corner from the right was headed over the crossbar by Luke Byrne, to the relief of the home supporters.

Shels' came even closer to breaking the deadlock in first half stoppage time when a Dayle Rooney effort following another corner, this time from Georgie Poynton, flashed against the upright before flying away to safety.

Treaty will have been pleased to get to half-time against their in-form opponents on level terms.

Shels' came close to opening the score again in the 47th minute when the ball was knocked back to Ryan Brennan by Shane Farrell, but his curling effort from the edge of the box flew narrowly wide.

Seven minutes later, Treaty produced their best chance of the evening, when Anthony O'Donnell got on the end of Marc Ludden's cross, but his header flashed just outside the left hand upright.

The opening goal of the game, however, arrived in the 68th minute when Michael O'Connor fired Shes' in front with a clinical finish after he chested the ball down, before rifling into the bottom corner of the net.

Treaty were almost level within just 60 seconds in the most dramatic of fashion. Treaty full Marc Ludden looked to chip Shels' keeper Clarke from just inside the Dubliners half, but the just clipped the crossbar before flying over.

Shels' came close to adding a second goal when a slack kick-out from Tadhg Ryan feel to Rooney who fired a shot goalwards, only for Ryan to recover and stop the effort on goal with a smart save.

Treaty made three changes as the second half wore on in a bid to grab a precious equaliser. It didn't look like happening until Armshaw's clinical finish in the 93rd minute.