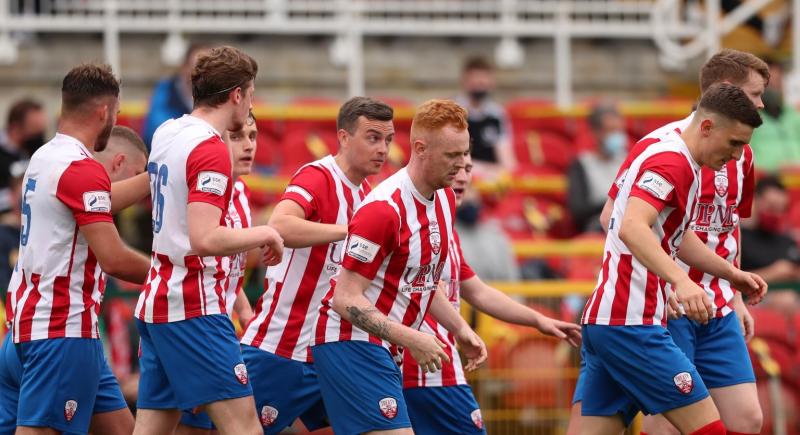 Kieran Hanlon, centre, is congratulated by his Treaty Utd team mates after scoring one of his two goals from the penalty spot against Cork City

RESILIENT Treaty United got their SSE Airtricity League First Division campaign back on track with a precious 3-2 victory over Cork City at Turners Cross on Friday night.

A 74th minute goal from substitute Joe Collins saw Tommy Barrett's battling treaty side secure their second win of this league season against the Leesiders.

Earlier, the second of two goals from the penalty spot courtesy of striker Kieran Hanlon, had helped Treaty fight back from a 2-1 half-time deficit to draw level.

Treaty's third away win of the season also saw the side bounce back to winning ways following their first home defeat of the season just seven days earlier against Galway United.

The success was also achieved despite Treaty having a lengthy injury list at present.

Treaty host First Division leaders Shelbourne in another crucial league fixture at the Markets Field on Friday night next, 7.45pm.

The defeat means Cork City have won just one of their last seven games in the First Division.

In team news, Jack Lynch missed the game through injury, while Mark Walsh returned to the substitutes' bench for the first time since April. Walsh the made his comeback from injury when introduced late in the second half.

Visitors Treaty took the lead after 17 minutes. Cork City's Jonas Hakkinen was deemed to have handled the ball inside the penalty area following a corner and the referee pointed to the penalty spot.

Up stepped Kieran Hanlon, who had seen his effort from the penalty spot saved at Cobh Ramblers two weeks earlier. This time the striker made no mistake firing the ball past Mark McNulty to give the Limerick-based side a 1-0 lead.

Treaty United were then dealt a real body blow just before half-time when falling behind.

Goalscorer O'Brien-Whitmarsh won the ball and found Cian Murphy who slots it into the bottom corner of the net to help the Leesiders into a 2-1 interval lead.

Resilient Treaty United were level within two minutes of the restart when Kieran Hanlon netted from the penalty spot for the second time after another handball from a Cork defender inside their penalty area.

The visitors took the lead on 74 minutes when substitute Joe Collins fired home from the edge of the area as his effort deceived keeper McNulty and bounced past him into the net.

It proved to be the winning goal as Treaty held the home side at bay through four minutes of added time to secure an excellent away victory.