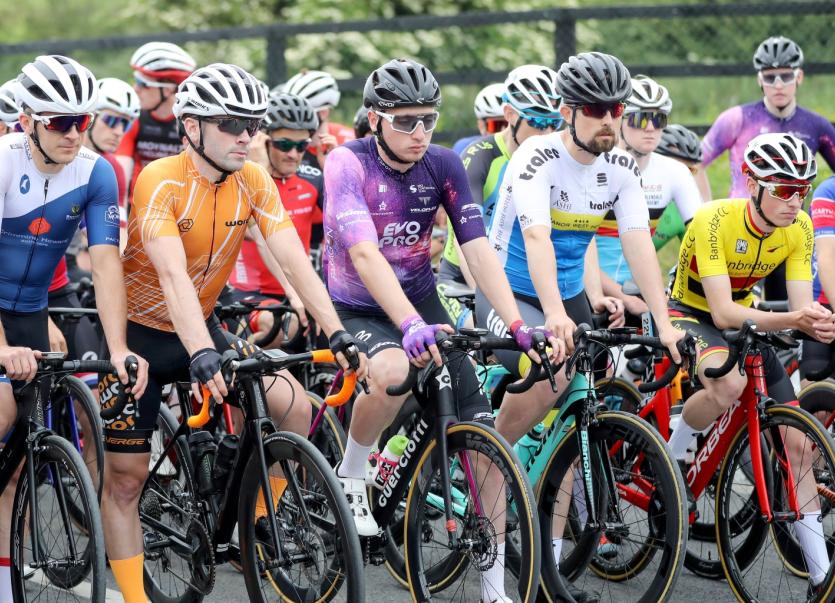 THE first round of the 2021 National Road Series produced a thrilling day of spectacular racing in Knockaderry last weekend.

A festival of cycling filled the West Limerick roadways around the picturesque rolling countryside, located a short distance outside the town of Newscastle West.

The Newscastle West Wheelers-organised event was run across the same roads as the hugely successful 2020 National Championships and those same routes gave some magnificent racing.

The day began early with the first of the road series seeing the women of the junior and senior ranks take on 61.5km. The loop was different than the men’s circuit but still proved a worthy challenge to the best of the country’s female racers.

The 20.5km loop was completed three times and the racing was frenetic and included dozens of attempts at breakaways. But such was the ferocity of the racing that no rider could go free. It came to the last lap and the heavy roads coming back into Knockaderry whittled down the numbers but as the remaining group of riders rounded the sweeping left up-hill bend they massed across the road.

Eve McCrystal was the victor in a stunning display of power and took the victory crossing the line ahead of Caoimhe O’Brien and Megan Armitage who took the places on the podium.

In the Junior edition of the race Erin Grace Creighton led it home, Caoimhe May and Aoife O’Brien taking the next places. Speaking after her victory Eve McCrystal said she was happy to be back racing the National Series events.

“It was good, first and foremost I was delighted to be on the start line with the girls as it has been two years since I last did the national series. The weather was nice to us. There was a lot of action out the road, I tried a few times to break away but to no avail. It is that type of course.

"I never thought I would say it but it needs to be a little bit more hills for me. It was a great bunch, very strong and a lot of new girls coming up so it is exciting for women’s cycling in the future,” she said.

Next to line up at the start finish straight was the Junior men with a stellar field of some of the brightest talents in the country including reigning national champion Ronan O’Connor.

Their race was run over a different course and took in the more testing steep finish into village. They were set for a 17.1km course with five orbits of a total of 85.5km.

Despite the change in topography the race followed a very similar plot to the women with multiple attacks throughout the laps but no one succeeding in making it stick. Glendale rider Dean Harvey came over the lip of the hill climb within sight of the line and lit the after burner.

Sprinting clear of the opposition sprinting to a resounding victory with two to three bike lengths of daylight between him and Odhran Doogan with Ronan O’Connor taking third place. Dean, who is a second year junior, said:

“I did a lot of attacking and I thought I was going to get dropped but it worked out and I am happy to win and I’m looking forward to the next one.”

The senior male riders of the A1 and A2 fields committed similar excited efforts to attack the peloton but after three laps it was still together each time as it came to that leg sapping climb. Their course was the same as the juniors with 17.1km over 8 laps equalling 136.8km.

There had been at least two crashes in the bunch as they fought for position on the tight roads but injuries were limited and many riders remounted and set off to chase.

Repeated salvos were fired by the peloton as efforts continued to break free but time and time again they were brought back. It was a bruising and exhausting race for many of those competing and the effort to surmount that climb to the finish on each lap was whittling down the field.

It wasn’t until the penultimate lap that the race was ripped asunder, to some degree, precipitated by a deluge of precipitation from the menacing clouds rolling across the course.

But that shower passed and when the wet moved off the roads what was left was a splintered peloton in numerous groups. The last lap had five riders ahead the nearest body of chasers but their lead was insurmountable and the shrewd positioning of Luke Smith who unleashed a huge sprint to take the victory.

He was followed behind by Gareth O’Neill and Mark Dowling took the last step of the podium. Luke Smith said after his win:

“This has been a long time coming, I put a lot of work in over the last eight months of lockdown. I knew it from the nationals on this tough course that it is just a process of elimination, so it is a wearing down and all about keeping the wheels.

The break got away on the second to last lap and we rolled through nicely and we just kept our powder dry as much as possible. I am absolutely delighted, it has been a long while since I got the hands up and hopefully there’ll be much more to come,” he said.

Organiser of the event, Liam Collins, of Newcastlewest Wheelers, said it was great to see the riders back out on his local roads.

“We are all delighted it is a great boost for the village and the broader Newcastle West area here in County Limerick. The local community here have been great and really got behind the event. It has been a great day of racing and we are all looking forward to the next one,” he said.

Other events on the day was the Michael Shiels and Darach McCarthy A4 race and A3 competition. The A4 event was won by local rider Paul Collins, of Newcastlewest CC, while the A3 race was won by Cork rider Liam Crowley.