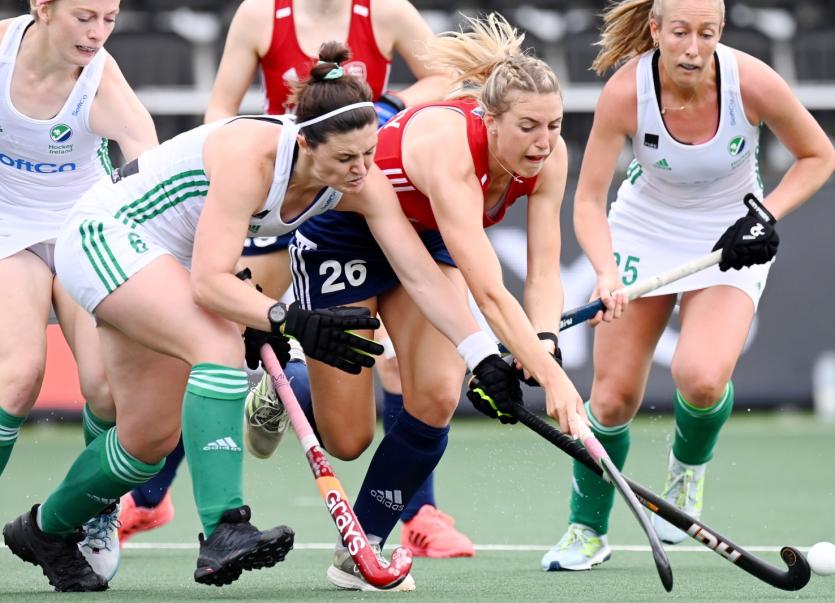 Limerick's Roisin Upton, second left, in action for Ireland against England at the Women's EuroHockey Championships

TEAM Ireland has officially selected the hockey team of sixteen players who will compete at the Olympic Games in Tokyo this summer with two players from Limerick-based Catholic Institute named in the squad.

The players to travel to the Tokyo Olympics were announced on the back of the EuroHockey Championships which took place in Amsterdam last week.

Twenty seven-year-old Limerick woman Roisin Upton, who was such a key figure in helping Ireland qualify for this summer's Olympic Games in Tokyo and has won 81 caps for Ireland to date, is joined in the squad by her Catholic Institute clubmate, Cratloe's Naomi Carroll.

Róisín Upton won the first of her Ireland caps against Scotland in November 2016. The talented Limerick woman was a key member of the Ireland team which won a silver medal at the 2018 Hockey World Cup in London.

Cratloe native Naomi Carroll recently played her first capped match since the summer of 2018 at the recent EuroHockey Championships, having taken the long road back from an ACL injury sustained while in ladies football action for Clare. Since then, she was part of the rejuvenated Irish indoor hockey side in 2020 before earning her recall to the senior outdoor setup.

Twenty eight-year-old Carroll won the first of her 115 Ireland caps against Wales in 2012.

Also announced in the Ireland squad to compete at next month's Olympics were the two travelling reserves and goalkeeper who will compete in Oi Hockey Stadium from the 24 July until the 6 August 2021.

The Tokyo 2020 team is largely formed from that record breaking crew, which also features the majority of the 2018 World Cup Silver Medal winning squad.

In Tokyo, the team will compete in Pool A, alongside South Africa, the Netherlands, Germany, India and Olympic Champions, Great Britain. Their first competition takes place on Saturday 24th July against South Africa.

Team Ireland Hockey Coach for the women’s team, Sean Dancer said: “The Olympics is the pinnacle of our sport. We are excited and privileged to be the group representing Ireland's women's team at their first ever Olympics.

"It is important to acknowledge all the hard work and sacrifice of everyone that has been involved now and in previously with the team to get to this point.

"We are going to take the key lessons from the recent Europeans to make the gains we need for the Olympics.”

The officially selected hockey players for the Olympic Games are: