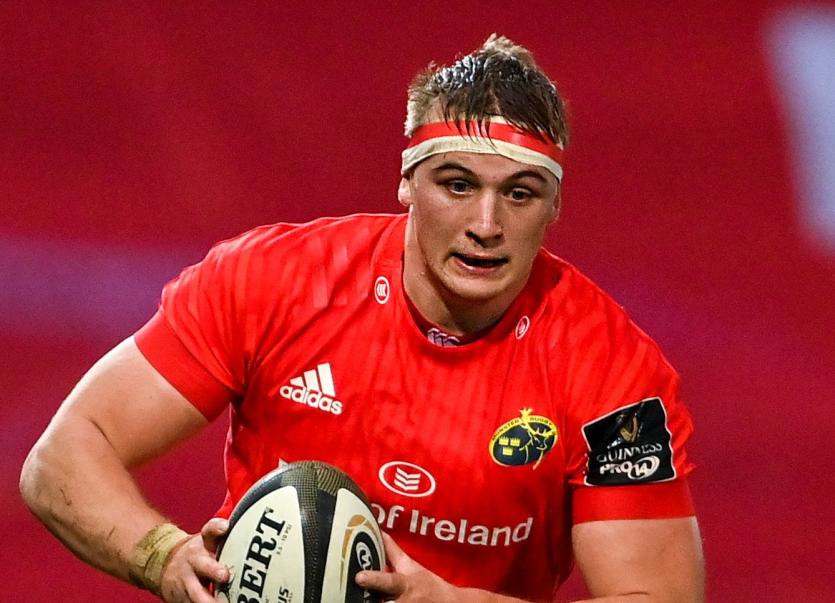 BACK-ROW Gavin Coombes has been named Munster Rugby Men’s Player of the Year for 2020/21 with the 23-year-old becoming the youngest ever winner of the award.

Tipperary native Dorothy Wall has deservedly been named Women’s Player of the Year following an excellent season with a number of top performances on the international stage.

The powerful back-row forward enjoyed a fantastic campaign and scored 15 tries in 22 appearances, the most tries ever scored by a player for Munster in one season.

The Skibbereen man featured in 22 of Munster’s 25 fixtures (17 starts) and was consistently superb throughout, averaging a try every 87 minutes.

Along with his record-breaking try-scoring exploits and powerful ball-carrying, Coombes was equally effective in defence and was a constant threat to the opposition at the breakdown.

A product of Skibbereen RFC and Bandon Grammar, Coombes has been named in the Ireland squad for the Vodafone Summer Series and will hope to cap off an outstanding campaign with his first Ireland cap.

The Women’s Player of the Year accolade was won by Dorothy Wall.

Tipperary native Wall enjoyed an excellent season with a number of top performances on the international stage.

The 21-year-old started playing rugby at Fethard & District RFC before progressing through the Munster pathway which included success at under-age level.

The back-row lined out for Munster Women during the 2019/2020 interprovincial championship before making her international debut against Scotland in the 2020 Six Nations.

Two further appearances as a replacement followed until Wall earned her first start for her country in the rescheduled Six Nations clash with Italy in October 2020.

Wall backed that up with three further starts in the recently concluded 2021 Six Nations as she established herself as an integral part of Adam Griggs’ side which included tries against Wales and Italy.

Her performances this season have been characterised by powerful ball-carrying and a relentless work-ethic in defence. Despite only having seven caps to her name, the Tipperary woman is already leading by her actions on the pitch. She is well-deserving of the Women’s Player of the Year accolade.

Due to Covid-19 government restrictions and limited activity across domestic rugby this season the awards focused on individual standout performances at elite level.