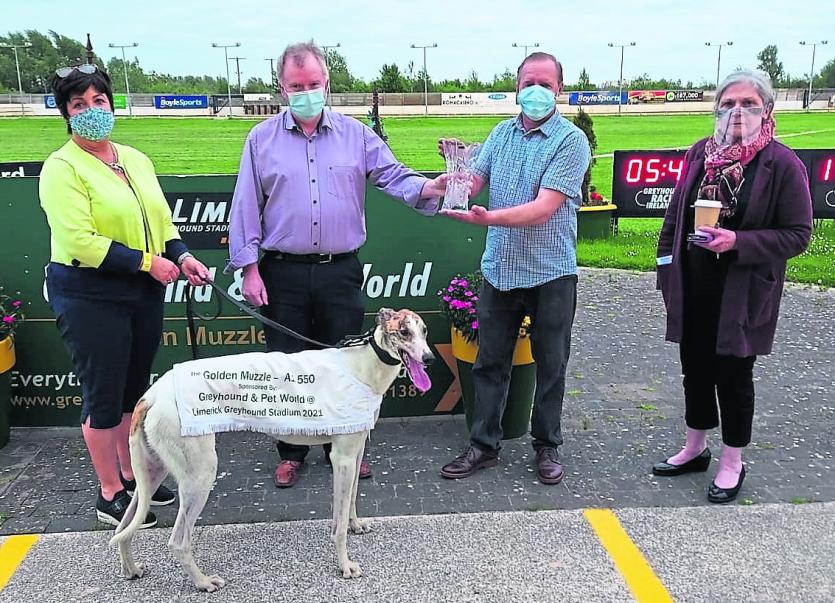 THE Greyhound & Petworld Golden Muzzle A1 550 was the star attraction at Limerick greyhound stadium Saturday night and it was Blastoff Harry who produced a strong running display to land the €4,000 first prize for Gowran trainer Paul Hennessy.

As expected, it was Priceless Henry who produced another slick break from trap six to make the early running for the Black & Amber kennel and he was followed in the early yards by the favourite, Meduza, who was next to show from trap three.

Blastoff Harry stormed to the front and the son of Tarsna Havana - Blastoff Khalesi, who started his career with a bang down in Clonmel, wore down Priceless Henry to land the spoils.

A half a length separating the kennel companions, the time for the 3/1 market chance was a fast 29.83 with Magical Jasper also finishing well to claim third.

Aside from the Golden Muzzle decider, the four opening-round heats of the Widdess Fitzgibbon Pharmacy Treaty Cup Open 350 got underway and there were plenty of early upsets for some very fancied runners.

Kerry trainer Patrick O'Connor took the opening heat with Cormacs Jet. Owned by Nicholas Murphy and Philip Ryan, the winner stayed on well in the closing stages to hold off Seomra Nate by a length at the line. A brilliant 18.83 winning run.

The second heat of the night was a closely run affair as Fionns Emirate as Michael Leahy's dog scored in 18.93. The winner is proving an ultra-consistent type and he finished with a bang late on to chin Astra Eclipse close home. A half a length separating the pair at the winning line.

The final heat of the night also saw a massive upset as Drahan Jet tasted defeat for the first time in his last five starts as Paradise Mission landed the spoils. Trouble ensued at the bend as Paradise Mission went clear and Sean Meade’s black stayed on well to seal a three and a half-length victory over the fast-finishing Mohane Gent in second.

Also this past week, Greyhound Racing Ireland confirmed that CEO Ger Dollard to depart this September.

The Limerick native has been CEO since September 2017 and is leaving the organisation to pursue other areas of activity.

“I have seen firsthand over the last four years the passion and interest that exists across the country for the sport of greyhound racing. I feel, however, the time is now right to look at a new chapter in my career and take the opportunity to pursue other areas of interest.

I look forward to continuing the job of work over the coming months and progressing a number of initiatives before departing RCÉ in September next,” said Dollard.

“The past four years have been a challenging time for RCÉ and the wider greyhound industry. The Board would like to acknowledge Gerard’s contribution during what has been a period of great change for RCÉ and the industry generally and wish him well for the future,” said Nyhan.