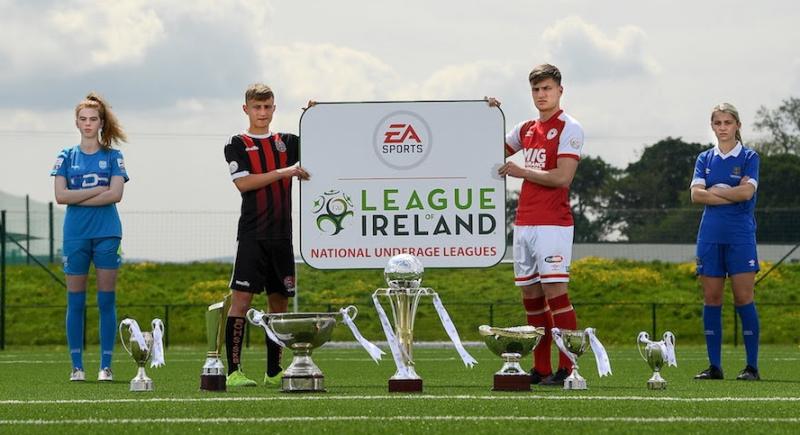 Two Limerick-based clubs, Treaty United and Limerick FC, will have teams participating in a number of the National Underage Leagues this year.

It was also confirmed that EA SPORTS will become the title sponsor of the new competitions which get underway on Sunday week.

With Government approval to return to play now in place, the new season will kick-off on the week ending June 27 and there are some exciting changes to look out for, including:

•  The Women’s National League has added a new tier at Under 19 level.

•  Underage Finals will be live streamed, with full match commentary, on LOITV at the end of the season.

• The Men's Under 13 League has been revised to an Under 14 League.

In the EA Sports U14 National Underage League, Treaty United are in Group E along with Cork City, Kerry, Cobh Ramblers and Waterford.

Treaty kick-off their campaign with an away date against Cork City on July 3.

Meanwhile, both Treaty United and Limerick FC will have teams competing in the EA Sports U15 National League of Ireland.

Treaty take on UCD in their opening game on June 26, with Limerick facing St Patrick's Athletic on July 3.

Treaty United will be away to Waterford in their opening fixture on June 27.

Meanwhile, Treaty United will have a team competing in the EA Sports Women's U17 National League of Ireland.

Treaty Utd will be joined in Group C by Carlow-Kilkenny, Cork City, Wexford Youths and Waterford.

Treaty take on Cork City in their opening fixture on June 26.

Speaking on the new announcement, newly appointed League of Ireland Academy Development Manager, Will Clarke said: “We are very excited with the prospect of collaborating with EA SPORTS to further enhance the development of our League of Ireland academy system and we are delighted that a brand such as EA SPORTS sees the potential in our underage game. We look forward to working closely with EA SPORTS in the coming years.”

League of Ireland Director, Mark Scanlon said: “I am delighted to welcome EA SPORTS on board as sponsor of this crucial part of the League of Ireland structure. This partnership will help strengthen the development of the game and further support the great work that League of Ireland clubs perform with young players as they progress through the game, and hopefully into first team football with their clubs.”

FAI Partnerships Manager Conor Cullen said: “We are delighted to renew our long-standing partnership with EA SPORTS, and to welcome them as the Title Sponsor of the EA SPORTS National Underage Leagues.

"EA SPORTS are a globally-recognised brand, and through their popular FIFA video game series, they engage with millions of football fans on a day-to-day basis. We are looking forward to working with them to build the profile of what is a key area of the domestic game.”

EA SPORTS FIFA Marketing Director, James Salmon said: “EA SPORTS have had a long-standing partnership with the FAI and we’re thrilled to continue our association by becoming the official sponsor of the National Underage Leagues.

"As the pipeline for aspiring young talent to move through the Elite Player Pathway this partnership reinforces our commitment to grassroots football. Through our collaboration with the FAI we look forward to continuing to support clubs, players and fans across the country.”