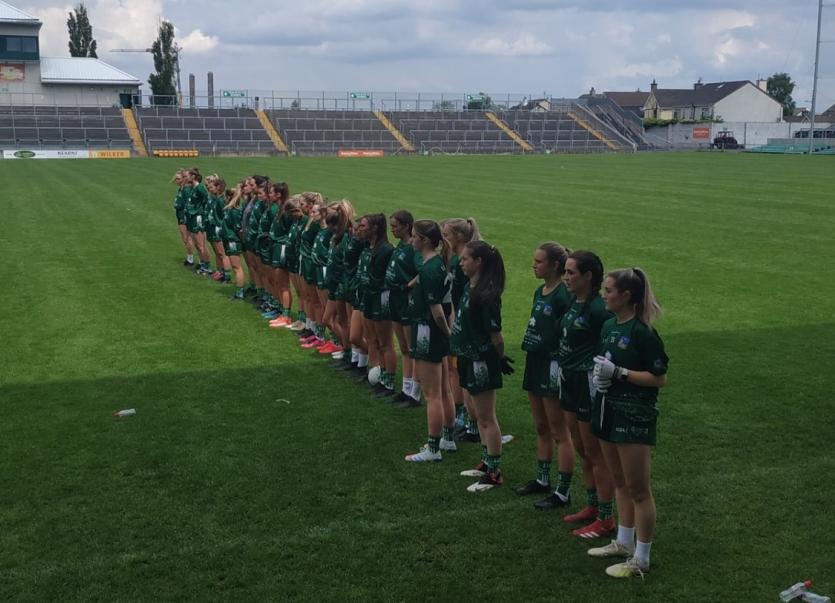 Limerick stand to attention for Amhran na bhfiann ahead of the game in Tullamore. PIC: Limerick Ladies Football

DEFEAT for Limerick in their opening game of the 2021 Lidl Ladies Football League.

Next up for Limerick is the visit of Carlow next Sunday to the LIT Gaelic Grounds.

Limerick started with 11 of the team which lost to Fermanagh in the All-Ireland Junior Championship semi final last November. This team to face Offaly had three dual players - Yvonne Lee, Roisin Ambrose and Aine Cunningham who had all played in the Littlewoods Ireland Camogie League the previous day.

Offaly had the aid of the breeze in the opening 30-minutes and brought a 2-5 to 0-6 lead into the break.

While this was Limerick's first fixture of the season, Offaly had beaten Carlow in their first game and looked the sharper for that game in the opening half.

The home side had the ball in the net in the fifth minute when a long ball into the goalmouth evaded all except Mairead Daly who had drifted inside the cover to finish from close range around the advancing goalkeeper.

Undeterred Limerick settled and were soon 0-4 to 1-0 ahead.

But by the mid-point of the half and at the water break it was Offaly 1-2 Limerick 0-4.

Amy Gavin Mangan had successive points for Offaly on the resumption to extend their advantage out to the goal.

But back came Limerick with Katie Heelan and Lauren Ryan scores to leave just the minimum between the teams once more.

In a half in which they had seven wides, Offaly did increase their lead before the half time whistle. Again their goal scorer was Daly, who a cool finish low to the net in the 25th minute.

All that left Limerick trailing by five points at half time but with the aid of the breeze to follow.

Within 90-seconds of the restart Limerick had two goals.

Straight from the throw-in Andrea O'Sullivan soloed through the middle to find the net with just 16-seconds gone.

Just over a minute later the ball was back in the net - Amy Ryan finishing with aplomb to move Limerick 2-6 to 2-5 ahead.

Lauren Ryan added a point and Limerick had a two point lead.

But Offaly's response was impressive with five of the next six scores to lead 3-9 to 2-8 at the water break.

Lauren Ryan's third point of the day was the only Limerick score in this period of Offaly dominance. They were helped into the lead by a 12th minute penalty from Grainne Ryan.

In the final quarter, Offaly moved 3-11 to 2-8 clear when Amy Ryan ended a barren spell for Limerick with a neat point.

There was to be just one late Limerick score, from Cliodhna Ni Cheallaigh, on a day when they finished with three wides and Offaly had 12.