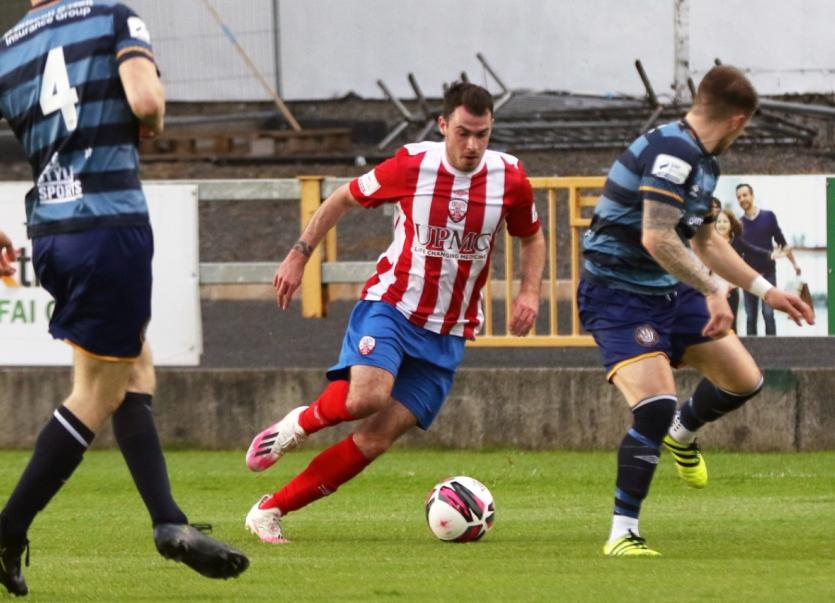 RESILIENT Treaty United returned to winning ways in the SSE Airtricity League First Division when recording a precious 2-0 victory over Bray Wanderers on the back of an improved second half showing at the Markets Field on Friday night.

A terrific solo goal from substitute Willie Armshaw in the 86th minute, followed by an own goal two minutes later, helped Tommy Barrett's side get back to winning way ahead of the league's mid-season break.

The game had looked like finishing in a scoreless draw until it produced an action-packed finish and those two goals in quick succession.

Armshaw's fantastic solo goal was worthy of winning the points in its own right. The former Limerick FC U-19 and St Michael's player from Cappawhite eased his way into the Bray penalty area, thanks to some dazzling footwork before he unleashed a terrific shot low into the right corner of the net from an acute angle.

Treaty sealed their fourth home success of the season two minutes later when Matt Keane's cross was met by Mark Byrne who headed into his own net.

This result has seen Treaty Utd jump up to fourth place in the First Division table, but just three points behind second-placed UCD.

The win was an excellent one for Tommy Barrett's charges ahead of the mid-season break. The home side had lost two of their three previous league fixtures. Treaty resume their league programme with an away date against an improving Wexford FC side at Ferrycarrig Park on Friday, June 11.

Bray had boosted the meanest defence in the First Division prior to kick-off, conceding just seven times in their opening nine games.

The home side deserved this success on the back of their second half showing. Bray had enjoyed the upperhand in terms of possession and chances create in the opening half, but the home side came to life in the second period.

On 25 minutes, Barnett swung a decent ball into the penalty area only for Joe Doyle to head over Tadhg Ryan's crossbar.

The best chance of the opening half an hour arrived to the visitors. Treaty defender Anthony O'Donnell missed the ball as it came into the box, only for Doyle to head it wide from close range.

The visitors should have taken the lead in the 38th minute. After a neat interchange of passes, Ryan Graydon picked out Richard O'Farrell eight years out from goal. However, Graydon flashed the ball over the crossbar with the goal at his mercy.

The home side's best opportunity of the half came in the 42nd minute when Joel Coustrain was fouled on the edge of the penalty area. However, Kieran Hanlon's free kick flashed outside the upright.

The game remained scoreless at half-time and it was the visitors who opened the second half the brighter.

Dylan Barnett's dipping effort from a free-kick shortly after the restart flashed just over the crossbar.

Treaty created their best chance of the game soon after. Ed McCarthy put Matt Keane through with a neat pass. However, Keane's shot was saved by Bray 'keeper Maher.

The home side came even closer to breaking the deadlock on the hour. However, Edward McCarthy was denied putting the home side in front when his superbly struck effort collided with the upright, before the rebound was flashed over the crossbar.

Treaty's play improved as the half wore on, but Bray too continued to carry a real threat. Home goalkeeper Ryan was called upon to make another excellent save when denying O'Farrell as he clawed the ball to safety in the 71st minute.

To their credit, Treaty continued to pose a threat with Matt McKevitt laying a neat pass into McCarthy's path. However, the 20-year-old's effort flashed just outside the right hand upright.

Armshaw's stunning solo goal and an own goal as Mark Byrne headed into his own net saw the home side secure the three precious league points.

Treaty Utd resume their league fixtures with an away date against Wexford FC at Ferrycarrig Park on Friday, June 11.