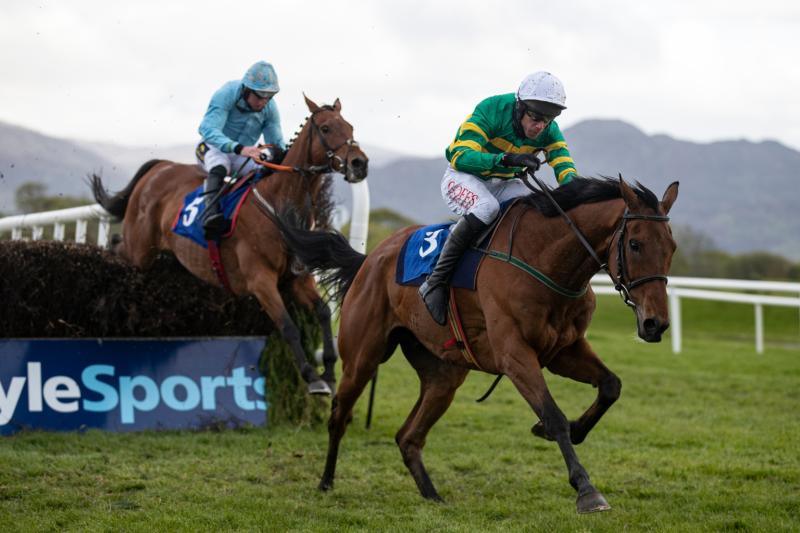 BRUREE-BASED trainer Enda Bolger boasts a fine record with his runners at Killarney and he landed a double in successive races at the Kerry track on Monday evening last.

With a cut above his eye sustained earlier on the card, jockey Darragh O'Keeffe missed out on the ride on Shady Operator in the Killarney National Handicap Chase and Kildare jockey Kevin Sexton stepped in to make much of the running on the JP McManus-owned eight-year-old.

Bolger and Derek O'Connor took the hunters’ chase with odds-on favourite Staker Wallace. A third winner in five days for O'Connor, the 4/7 chance had little difficulty in winning from the Foster-trained It’s All Guesswork and Jamie Codd.

The impressive form of the Billy Lee and the Paddy Twomey stable continued at Killarney on Tuesday where the trainer’s new recruit La Petite Coco easily won the median auction fillies’ race. Ballingarry jockey Lee had the easiest of times on the 11/8 favourite which went clear over a furlong from home to beat Sheila Lavery’s Belle Magic by four and a quarter lengths.

Having changed owner, the winner joined the Cashel trainer from Andrew Kinirons. Twomey said, “It was her first run for us so I’m thrilled. Team Valor are very good supporters of mine and it is great to train another winner for them.”

The Albany Stakes at Royal Ascot might be next on the agenda for the two-year-old which beat the Gavin Cromwell-trained Quick Suzy by a length in the colours of David Keoghan & Partners.

Oola jockey Cathal Landers helped Ross O'Sullivan maintain his good run of form at Wexford on Sunday where the Tommy Ward-owned An Fraoch Mor battled well to win the rated hurdle. The 7/1 chance beat the Henry de Bromhead-trained Due Reward.

The in-form Enda Bolger ended the week as he had begun it, with a winner. Darragh O'Keeffe was back in the saddle and partnered the Ann Marie McManus-owned Stealthy Tom to a two-length win in the second division of the two-mile one-furlong handicap hurdle at odds of 11/4 favourite.