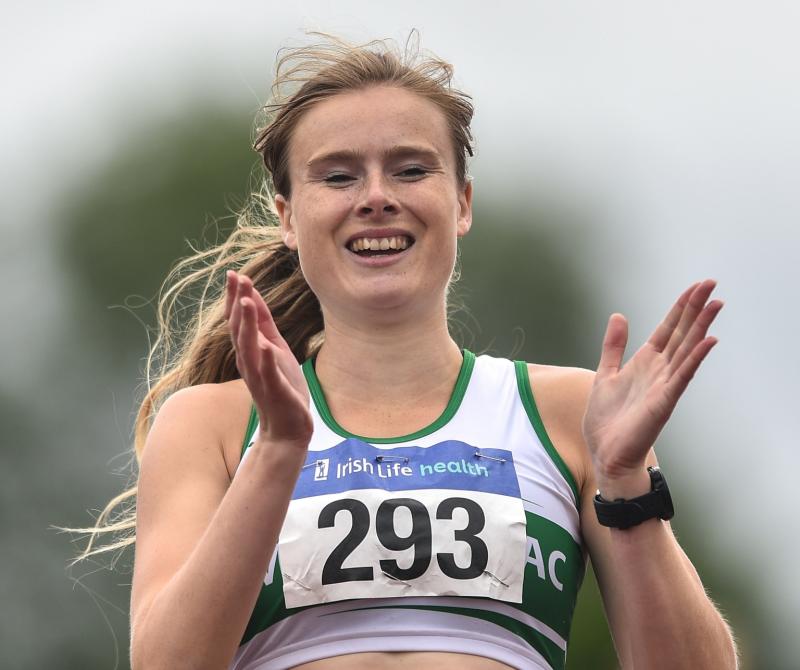 IN a time of 2:03.68 Emerald’s Jenna Brommell took third place in the 800m in the British Milers Club meet in Manchester.

Well done to all who took part in the annual Pieta House ‘Darkness into Light’. Some names included Patricia Wade, Niamh Doody, Yvonne Casey and Joanne Browne.
Well done to all who have so far completed the Dooneen AC Michal Rejmer Virtual 10 Mile. Entry is €10 through Eventmaster or Dooneen AC.

A TREBLE in the field events by Limerick and Munster Railway Cup Hurling Star Bernie Hartigan featured at the first Co Limerick Sports under B.L.E rules at Glenstal.

Hartigan the previous year’s N.A.C.A champion had a p.b Discus throw of 149 feet 1 ½ inches and he threw the Javelin 154 feet 8 inches when winning that event. In the 161 lb Hammer event he won with a throw of 158 feet 2 inches.

Brendan O’Connor who was due the following month to represent Ireland in the Catholic student games in Strasbourg had a double in the 100 and 220 yards contests.

John Cregan (Granagh) won the mile and 3 mile events. In the latter he secured a thrilling win over the many times Irish Champion Sean O’Sullivan whom he beat by a matter of feet in 14 minutes 59.3 seconds.

Cregan was second in the 880 yards. In the first year of inclusion of a women’s programme his sister Joan was an impressive winner of the ladies 880 yards while B. Anderrson, a Belgian visitor to Limerick won the 100 yards.

John Cregan, of Bruree, was second with Blackboy, (newly formed to cater for the Doon/Cappamore area), taking the team title at the first attempt.

TOM Madden of Redgate AC won the Limerick Leader sponsored 10K fun run in aid of Limerick Heart Unit in a time of 33:00. He was closely followed by Mike Feeney (Limerick AC) in 33:00.

Leo Morrison had raised a total of £730 and expected to top £1000 pounds eventually for the cause.