Young Munster RFC get a lift from EI Electronics 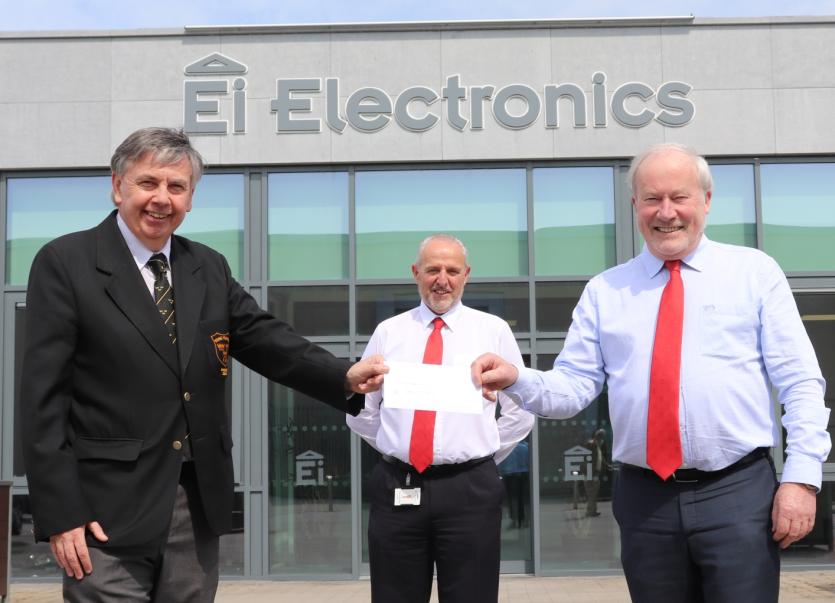 Pictured at the presentation of a cheque by Ei Electronics to Declan Deegan, President Young Munster RFC were Mick Guinee CEO, and Paul Kilbridge. The Kilbridge family is synonymous with the club

YOUNG Munster RFC received a lift - quite literally - from Ei Electronics at Clifford Park this week.

The Club has a lounge on the first floor of its clubhouse at Tom Clifford Park, which is also a viewing area on match days for its elderly supporters who cannot brave the elements or are advanced in years and are unable to stand and watch a match. The clubhouse is also a social activity location for local residents in the Greenfields area.

The first floor location has however proved restrictive for elderly and disabled visitors. After an appeal to Corporate friends to assist with the cost of installing a lift to provide first floor access, Ei answered Young Munster’s Call.

In line with its CSR objective of providing ongoing support to community-beneficial projects within the region, Ei Electronics viewed this as a very worthwhile endeavour, which would provide a much needed boost to a group of people who heretofore had been denied access to facilities at Tom Clifford Park.

Costing in excess of €40,000 to complete, Limerick City and County Council is supporting the project through the Disability Grant Scheme to the tune of €7,500. Ei Electronics has agreed to contribute €10,000 towards the cost. The goal is to have the lift in place for the coming season.

Young Munster RFC was formed in 1895, one hundred and twenty-five years ago in the heart of Limerick City. While it was primarily a sports organisation it quickly became very much part of the community in the South Side of Limerick City.

With relative success in the early years it quickly became one of the leading forces in Irish Rugby culminating in the outstanding success in becoming the All Ireland League Champions in 1993.

As a Global leader in the design and manufacture of smoke and carbon monoxide alarms, and employing over 1,000 people worldwide, Ei Electronics is headquartered in Shannon where all key Manufacturing, R&D and Commercial functions are co-located.

Its business has expanded significantly over its 30-year history and today it is ranked as one of Ireland’s leading indigenous electronics manufacturing and exporting companies. Turnover in 2020 was in excess of €250 million. Overseas subsidiaries are located in the UK, Germany, France, Poland and the USA.