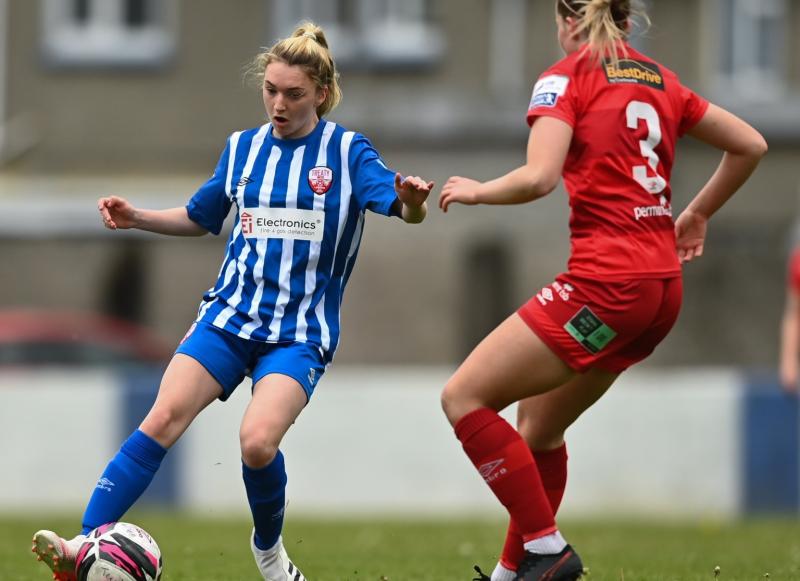 Cara Griffin, of Treaty United, in action against Jessie Stapleton, of Shelbourne, in their SSE Airtricity Women's National League fixture at Jackman Park on Sunday

TREATY United are still searching for their first win of the Women's National League season after the young side suffered a 5-0 defeat to high-flying Shelbourne at Jackman Park on Sunday.

Treaty, who have been hit with injuries to several key players, remained well in the contest when trailing by 2-0 at half-time. Noelle Murray fired third-placed Shels' into the lead after 20 minutes. A second Shels' goal from Murray from the penalty spot on the stroke of half-time proved crucial.

The Dublin side added three more second goals to pull clear of their hosts, including one just two minutes after the restart from Jessica Ziu.

Treaty goalkeeper Michaela Mitchell made a strong of excellent saves for the home side to prevent the Dubliners from adding to their tally.

Treaty are missing a number of key players through injury at present and their absence is being felt by the Limerick-based side in a demanding league.

The defeat leavesthe Niall Connolly-managed Treaty side with just a single point to show from their opening six league fixtures.

Shels' have now won four of their opening five fixtures in the league this season.

Treaty United have a bye next weekend with their next outing in the Women's National League coming in two weeks time, a meeting with Cork City on Leeside on Saturday, May 22 at 2pm.