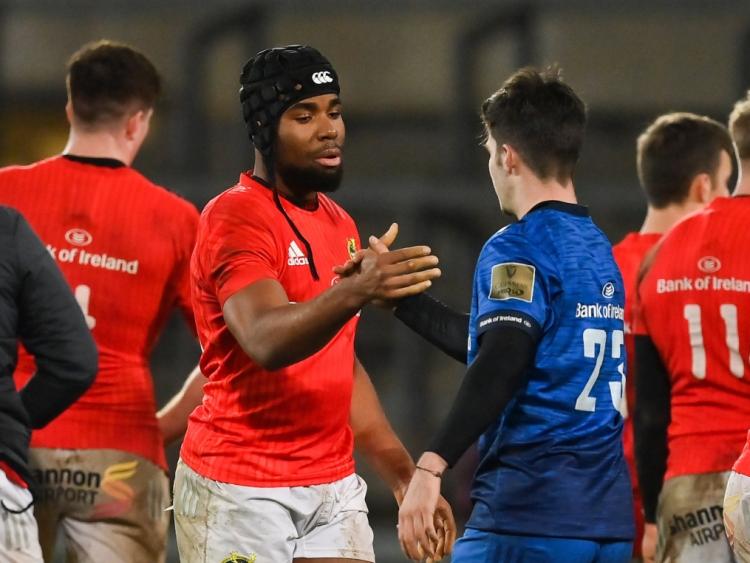 Daniel Okeke, pictured here after a Munster A game against Leinster A last December took part in the Ireland U20 Talent Camp

IRELAND U20 Head Coach Richie Murphy got his tenure under way with a talent camp of 38 players predominantly from the National Talent Squad (NTS) and Provincial Talent Squad (PTS) programmes.

A total of 12 Munster players attended the two day camp held at the IRFU’s High Performance Centre in west Dublin where participants were required to undergo PCR testing before being cleared to attend and involved two on-field sessions as well as a trial game.

The PwC sponsored Ireland U20s are commencing preparations ahead of the rescheduled 2021 U20 Six Nations Championships which will take place across June and July.

Richie Murphy, Ireland U20 head coach, commented, "I’m delighted about the new role.  Its’ been a really interesting couple of weeks.  Over the last two weeks we have been really trying to build this squad that have come in for this camp.

"It’s been really interesting to get around and talk to a lot of people and try to build our coaching team on the back of that and we feel like now we are in a good place to go forward.

"A lot of these guys would be in the National Talent Squads, some of them would be in the Provincial Talent Squads and some of them would be club players.  So a lot of these guys haven’t had a lot of involvement in rugby over the last while due to the Covid situation so it was good to get in touch with them, bring them in and see how enthusiastic and how hard they worked and obviously they are looking for another opportunity and try to wear a green jersey for the Irish U20s."