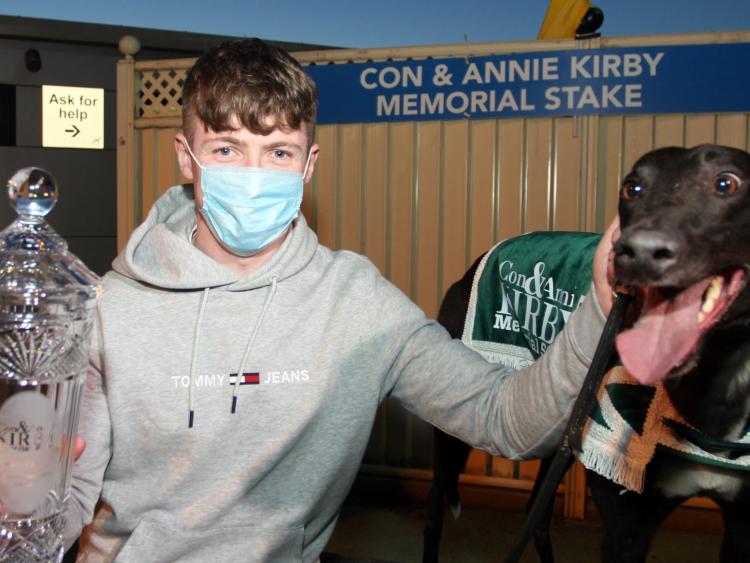 IT was the biggest night of the year at Limerick Greyhound Stadium on Saturday night as the Con & Annie Kirby Memorial came to a close and for Ballyneety owner Michael O'Dwyer and trainer Mark O’Donovan, it will live long in the memory with Stonepark Leo emerging victorious.

It has been five weeks of exciting action at Limerick Greyhound Stadium and although racing remained behind closed doors during these times, the virtual aspect which coincided with the Con & Annie Kirby has been brilliant to see.

The generous sponsorship of JP and Noreen McManus once again brought the greyhound and GAA communities together and the following the competition generated over the past number of weeks from a social media perspective was incredible to say the least.

Not only was there a massive prize of €80,000 for the winner of the Classic, but there was plenty at stake for the attached GAA clubs as well.

Already guaranteed a share of the €20,000 pot for reaching the final, the winning nominator club Castletown Ballyagran bagged the top prize of €10,000 contribution towards their club!  In terms of the race itself, there was no shortage of drama on display.

It had been noted countless times throughout the week how important the break would prove as a result of the fascinating trap draw for the decider and as many expected, the key to eventual glory was found on the run to the opening corner.

Explosive Boy had been flawless in his performances throughout the Kirby but, as the lids opened it was Singalong Sally who showed narrowly in front from trap four with Agent Stanley in hot pursuit wearing the red jacket.

Making that anticipated dart to the fence in the early exchanges, the progress of Singalong Sally, along with Explosive Boy, was halted and it was Agent Stanley who quickly established a clear lead on the run to the opening bend.

Meanwhile, Stonepark Leo had totally missed the kick from trap six but due to the surge for the inside by his rivals, he was granted the freedom of Limerick on the outer and Michael O’Dwyer’s black showed brilliant early pace and track craft to sweep the opening corner and sit second.

STANLEY AND LEO BATTLE IT OUT

Heading into the back straight and the Marie Gilbert trained Agent Stanley held a narrow advantage from Stonepark Leo in second, with next best De Machine some seven lengths adrift of the leading duo back in third.

Displaying the now customary back straight burst of pace, Stonepark Leo was in full throttle from bends two to three and with the added advantage of defending the rails, Mark O’Donovan’s charge stormed past Agent Stanley at the 750-yard box.

At this point, Classic glory was well within his sights.

Claiming a sensational Classic victory in what was only his seventh start, the time for Stonepark Leo was 28.38.

De Machine once again showed outrageous pace in behind to contribute massively to the spectacle in finishing second, while the final podium place was claimed by Agent Stanley who ran his heart out a further half-length back in third.

The remainder of the field, Explosive Boy, Ballymac Merlin and Singalong Sally all endured luckless passages in the early exchanges and each greyhound will no doubt play a part in all the leading competitions going forward.