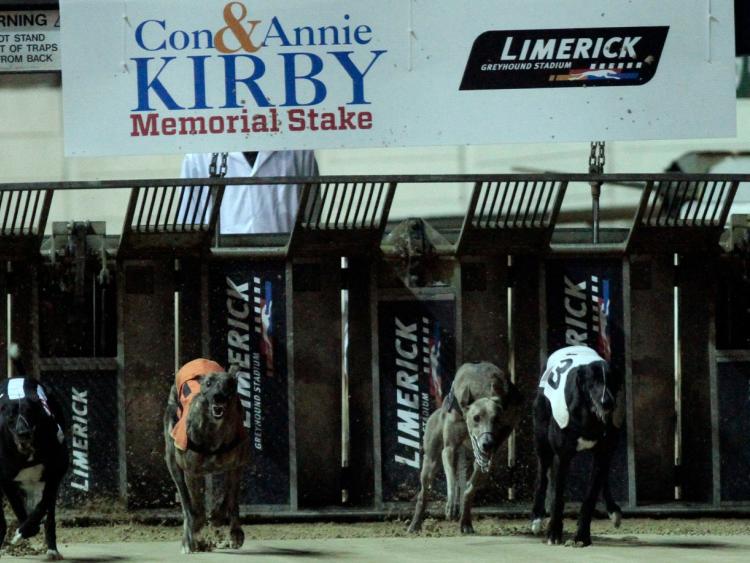 THERE is little doubt that after a series of terrific performances thus far in the stake, Explosive Boy has been the star of this year’s Con & Annie Kirby Memorial at Limerick Greyhound Stadium and Pat Guilfoyle’s tracker produced another flawless display on Saturday night night to power into next week’s €80,000 decider.

Anyone involved in the ownership or training aspect of greyhound racing will attest to the fact that the tension on a semi-final night is even greater than that of the final itself, such as the prize at stake for reaching any final never mind a Classic of this calibre.

That said, connections of Explosive Boy and indeed Stonepark Leo would have lit up as their charges flashed from traps to put themselves into commanding positions early on in what proved to be two semi-finals of an unbelievably high standard.

The Final of the Con & Annie Kirby Memorial 2021 can be viewed live this Saturday night on the SKY channel 437, Freesat channel 250 and online https://www.sportystuff.tv/#about from 6pm.

BOY AND STANLEY BATTLE IT OUT

Explosive Boy’s first round clock of 28.08 has yet to bettered in this stake but when the market leader was drawn to run from red in tonight’s opening semi-final, a bold bid wasn’t out of the question given that a clear run was almost guaranteed for Peter Sutcliffe’s star tracker.

Indeed, that premonition came to light and as the hare flashed past traps, so too did the head of Explosive Boy as he bolted from his inside berth early on.

Not to be outdone however, the Marie Gilbert trained Agent Stanley was alongside the favourite for the opening yards and as expected, he proved to be the biggest threat in terms of a possible upset.

Posting a rapid 4.08 sectional early on, Explosive Boy scraped the paintwork as he tracked brilliantly around the first corner to quickly establish a two-length lead over Agent Stanley in second.

Meanwhile, Bombardier edged inwards early on from trap five and after appearing to brush the rail slightly, he lost momentum which allowed Ballymac Merlin to swoop around and occupy the third qualifying spot.

LEO UPSETS THE ODDS TO POWER INTO KIRBY DECIDER

If the opening semi-final was straightforward in terms of flashing from traps to make all, the second semi-final made for fascinating viewing as a neck, a head, and three parts of a length separated the first four greyhounds' home.

A five-dog affair after the unfortunate withdrawal of Valegro, joint market leader Singalong Sally would have been short odds given there was now a vacant trap on her outer to contribute to an already attractive pitch in one.

However, although Singalong Sally pounced from trap one as expected, Stonepark Leo also broke fast and Mark O’Donovan’s greyhound proceeded to show an unbelievable burst of early speed to outpace his more fancied rival in the opening yards.

Sweeping the bend in front wearing the striped jacket, Stonepark Leo led the field into the back straight as Singalong Sally followed in second, with De Machine, who shipped a hefty bump at the opening corner, sitting menacingly back in third.

Holding a two-length lead into the far side, Stonepark Leo displayed that exceptional back straight pace seen in prior rounds and yet again, Singalong Sally was chasing down a greyhound who up to now, was the only rival to inflict defeat on the Juvenile Classic champ in this stake.

Maintaining a healthy advantage approaching the penultimate bend, Stonepark Leo posted a slick 16.00 sectional, however, the chasing pack of Singalong Sally and De Machine were now making swift progress into the lead.

Stonepark Leo had done a lot of running to get this point but he was begging for the line in the closing yards and it came just in time for Michael O’Dwyer’s black as he held on to record neck victory over Singalong Sally in second.

The time was an exceptional 28.25 as De Machine, who perhaps didn’t produce the finish many expected based on his exploits in behind Explosive Boy last week, landed the final qualifying position at the expense of Ballymac Belvult, who ran a terrific race to just miss out by a head.

The remaining runner was Luminous Light and after producing that brilliant display last week, a hefty bump at the opening turn put an end to his challenge although he is certainly one to watch out for in the future.

The draw for the final of the 2021 Con & Annie Kirby Memorial along with their nominated Clubs are: