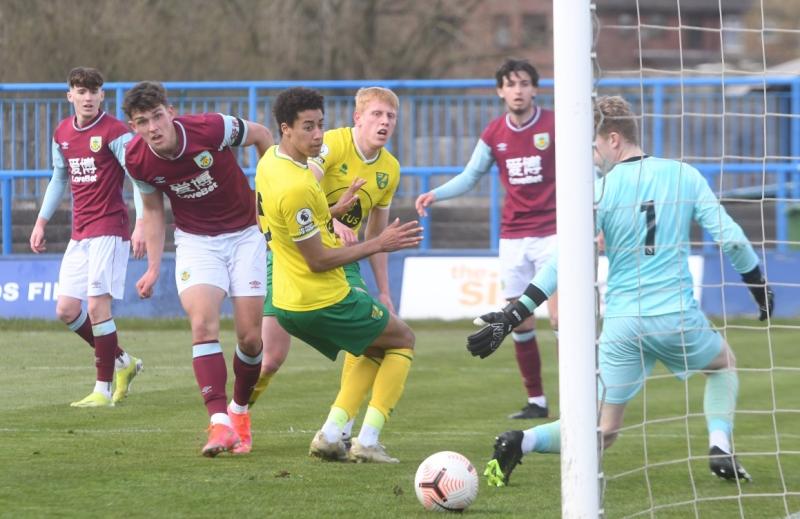 Limerick teenager Darragh Costelloe was on the mark for Burnley u23s in their 2-2 draw with Norwich City Picture: Burnley Twitter

LIMERICK teenager Dara Costelloe has scored his first goal at U23 level for Burnley against Norwich to keep their Premier League 2s Second Division play-off hopes very much alive.

Costelloe came off the bench at half-time and showed admirable composure late on to find the target, as Burnley U23s fought back from 0-2 down to earn a precious point against the Canaries in a 2-2 draw.

Steve Stone's Burnley side followed up on their draw earlier this week when scoring a 2-0 victory over Reading's U23s yesterday, Friday, when Limerick man Costelloe was in their starting line-up.

The win moved Burnley into third place in the PL2’s Second Division table behind Stoke and Leeds United.

Dara Costelloe joined the Academy of English Premier League side Burnley after impressing in a trial with the club earlier this year.

Former Aisling Annacotty player Costelloe joined the Clarets’ Academy in January after signing a deal with the Turf Moor club.

Eighteen-year-old winger Costelloe, a student at Castletroy College, had trained with the Clarets since last summer.

And after impressing in the U18 and U23 set-ups – helping Steve Stone’s side beat Newcastle United 2-0 in Premier League 2 yesterday afternoon – the former Galway United wideman has agreed a deal until June, 2022.

Limerick-born Costelloe, who played Kennedy Cup with the LDSL, joined League of Ireland side Galway in 2017 and made his senior debut at the age of 15.

The Clarets come from behind to salvage a point against the Canaries, with late goals from Lewis Richardson and Dara Costelloe.

LINE-UP | Here is how the U23s line-up against @RFCAcademy this afternoon. ⬇️

There's two changes from Monday's draw with Norwich, as Rob Harker and Dara Costelloe come in for Josh Benson and Lewis Richardson, with both not involved today. #REABUR | #UTC pic.twitter.com/7saf9uDfr8