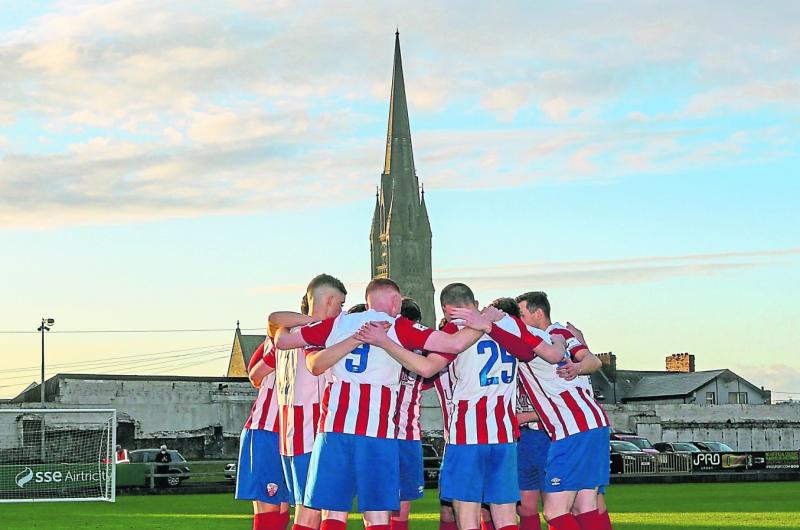 Treaty Utd players in a huddle prior to kick-off in their SSE Airtricity League fixture with Cobh Ramblers at the Markets Field on Friday night last Picture: Kieran Ryan-Benson

LIMERICK'S Treaty United face a trip West on tonight, Friday, as Tommy Barrett's charges look to extend their unbeaten start to the league season to four games with an outing against Galway United at Eamonn Deacy Park, 7.45pm.

Ahead of the game, Treaty sit in fifth place in the SSE Airtricity League First Division table, but just two points off pacesetters Athlone Town.

The Limerick side secured a 1-1 draw with Cobh Ramblers at the Markets Field on Friday night last.

Sean McSweeney, who lined out for the Limerick senior footballers in 2020, scored the Treaty goal in the opening quarter.

For the third successive game, Treaty had a player sent off during the course of a league game, this time it was Charlie Fleming who was dismissed just half an hour into the game.

Speaking about his decision to play for Treaty Utd this season, he said: “Soccer would always have been my main sport. Ever since I was 15 or so that was my decision to play soccer. That was always my focus.

"Then, last year, obviously the opportunity to play Gaelic football with Limerick came along and I really enjoyed it. We had a great run.

“They have a great set-up there now, they are in a good situation where they are. They are doing well.

“I think soccer was always my first sport, so when I heard that Treaty were getting involved in the Airtricity League I really wanted to get back involved and I am very happy with how it is going. Hopefully we can build on that as well.”

Friday night's opponents Galway are eighth in the First Division table with a game less played.
McSweeney said that while Treaty United were reasonably happy with their start to the season overall, there was still plenty of room for improvement

“I think overall we are happy with the start we have made to the season. At the start some of us might have been wondering how is it going to go when the squad was so late put together it was kinda difficult for us, but I suppose we definitely would have taken this at the start.

“You can see we are all coming together as a group as it goes on as well. We are hoping the performances can get a bit better as well.

“I think it was an improvement again today in the first 35 minutes and if we can bring that into next week again, I think of we can continue playing a bit more football and getting a few passes together we are going to enjoy it a lot more as well.

“This Friday night will be a big test. Galway have a lot of good individuals there definitely and they have a lot of experienced players there as well.”