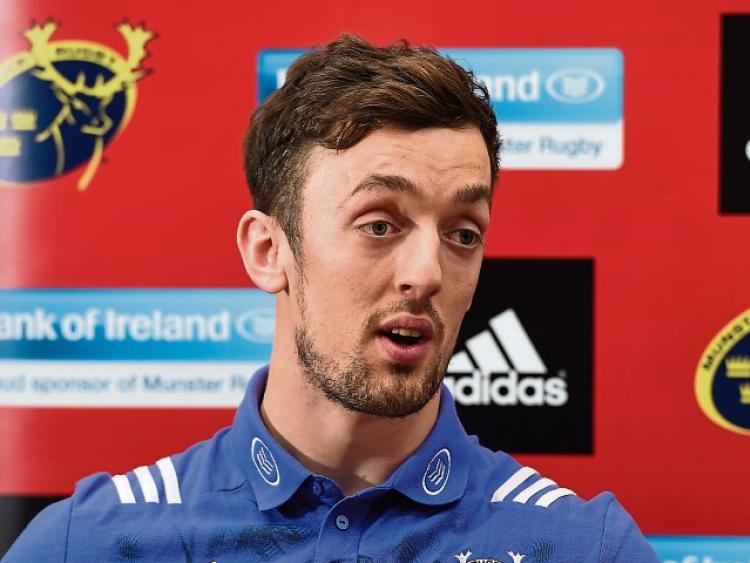 WINGER Darren Sweetnam said he would regret it if he did not take the chance on a short-term contract at French Top 14 side La Rochelle.

Sweetnam has departed Munster Rugby to take up a three-month contact with the Ronan O'Gara-coached French side.

He has also won three Ireland caps and scored one try.

Speaking about his move to France and the exciting new challenge, Sweetnam said: “I came over here on a medical joker contract for three months and hopefully if I impress and go well there might be something else on the table. It’s risky but it’s a great opportunity.

“I’ve left my home club, my comfort zone, and moved over here with my Leaving Cert French. I would regret it if I didn’t take the chance.

“It probably hasn’t hit me yet really that I’ve left Munster, thinking that I won’t be playing in front of fans again in Thomond Park or Musgrave Park.

“It happened so quickly, I packed my locker up on the Friday and only got to say goodbye to a few in person and I just put a message into the squad group and flew out then. It was all very surreal.

“My last game in front of crowds was against Scarlets in Thomond Park and if you asked me then would I be in France playing for La Rochelle over 13 months later I would have laughed at you, so in that sense it has all been a bit of a whirlwind few weeks.”

He joined the Greencore Munster Rugby Academy in 2012 after representing Munster through the provincial age-grade system.

A talented all-rounder, Sweetnam’s talents in hurling and hockey are well known – particularly his hurling skills having lined out for Cork in the 2012 All-Ireland semi-final.

Sweetnam made his Champions Cup debut for Munster in the memorable win over Glasgow Warriors on an emotional day at Thomond Park and scored his first European try in the quarter-final victory over Toulouse.

His rise continued with a further 43 Munster appearances over the following two seasons and his form was rewarded with international recognition and three Ireland caps between 2017 and 2018.

He featured in nine of Munster’s 20 games this season, scoring two tries.

Speaking about his time at the province, he told Munster Rugby's official website: “There have been so many standout moments in the red jersey for me, games like the Maori game, the Glasgow game after Axel’s (Anthony Foley) passing, and Toulouse in the quarter-final of the Champions Cup to name a few, but they were all special days.

“I grew up wanting to play for Munster, it was always my dream, and while this isn’t the ideal way of how I wanted it to end, very few players really get the ideal ending.

“There is nothing better than running out in a packed Thomond Park stadium, it’s incredible, they are the best fans. I saw what Holl (Billy Holland) said, and he’s right, it gives you a lift and it makes you play above yourself.  It means more, just playing for your home club in front of your family and friends, and it’s very special.

“I really just need to take this opportunity now, and who knows what will happen in the future.”