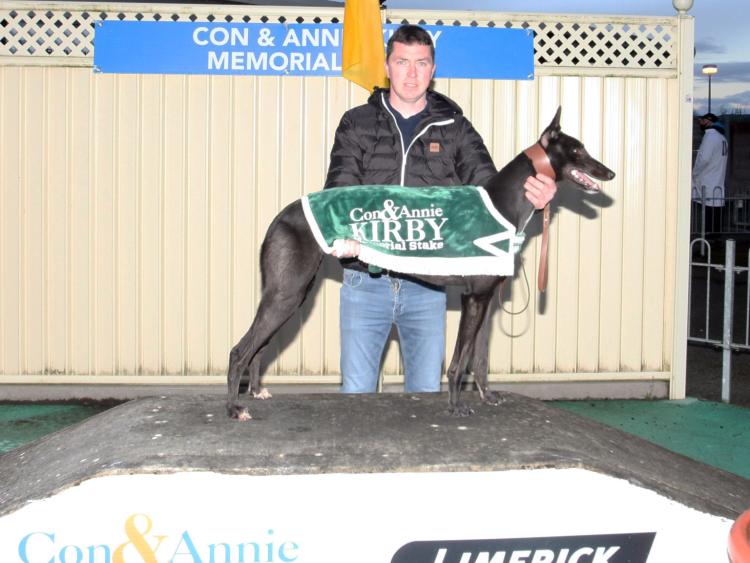 Pat Guilfoyle with his dog, Explosive Boy who won heat one in round three of the Con and Annie Kirby Memorial 525 at Limerick Greyhound Stadium on Saturday last

SATURDAY night last saw the quarter finals of the Con & Annie Kirby Memorial take place at Limerick Greyhound Stadium and while Explosive Boy and Singalong Sally both bounced back from prior round defeats, few would have predicted the outcome of the remaining two quarter finals as a number of market leaders made their exit from the competition.

Normally it's a case of saving the best to last but the opening quarter final of the night put a line through that theory as Explosive Boy (Good News - Delightful Girl) bounced back from defeat last time out for trainer Pat Guilfoyle.

There was little doubt ahead of the opening heat that the biggest stumbling block separating Explosive Boy from victory was his draw in trap six.

However, for a greyhound who was two from two while occupying the outside boxes, those fears were put to bed early as he bolted from traps to show a devastating turn of early pace in the opening yards.

Posting a 4.12 early sectional, Explosive Boy rounded the first corner with an already comfortable, three length advantage over Denis Lennon’s Luminous Light, while De Machine was just a length further back in third.

Entering the back straight and Explosive Boy extended his lead to four lengths as he galloped into the penultimate turn in 15.87 with De Machine, who remained a huge threat, now moving into second at the crown of the third bend.

Still all to play for in the final one hundred yards, Explosive Boy’s lead was cut in half but he wasn’t to be denied as despite the building pressure from De Machine, who ran another serious race in behind, Peter Sutcliffe’s star tracker crossed the line with a half a length in hand.

The time was a magnificent 28.15 as Luminous Light ran another cracker in behind the leading pair to take third. (15.95 sec).

Next best on the clock came in heat three and this was dubbed the clash of night as Singalong Sally, Ballymac Ariel and Deadly Destroyer were all penned in together.

In truth however, this clash didn’t materialise as the Pat Buckley-trained Singalong Sally (Tullymurry Act - Droopys Smasher) produced a masterclass of front-running to get back to winning ways.

From a very level break, it was Singalong Sally in red and Deadly Destroyer in trap five who emerged from the pack but as the latter pushed for the rails early on, bumping ensued and Singalong Sally made full use of her plumb pitch on the rails to turn the opening bend clear.

Quickly establishing a four-length lead into the back straight, Singalong Sally had clear daylight as Belnamadena Roxy benefited from her draw in stripes to swoop around in second, while Valegro occupied third at this point.

Rounding the penultimate turn and barring incident, Singalong Sally had this contest in the bag as she tracked brilliantly around the bottom two bends to maintain her five-length lead over the Benalmadena Roxy, who had now made the runners-up spot her own.

All eyes were drawn to the battle for third in behind as Valegro, Ballymac Ariel and Deadly Destroyer were all staking a claim entering the home straight with just a length separating the trio.

However, there was little doubt about the winner as Singalong Sally, owned by Gilbert Anderson, crossed the line five lengths clear to record a sizzling 28.21.

Belnamadena Roxy ran a cracker in behind for Stephen Pennel as she claimed second, and it was Valegro who held off the fast finish of Ballymac Ariel to land the final qualifying position in third. (16.09 sec)

There was a shock in the final quarter final of the night as Agent Stanley made it back-to-back wins for Patrick Flanagan and Erwin Birkmyre with hot favourite, Fabulous Azzura going crashing out.

All eyes prior to the race would have been on Fabulous Azzura as she bid to maintain her unbeaten record in the stake.

However, after completely fluffing the start from trap four, her Kirby tilt was quickly over. In contrast, Agent Stanley bulleted from trap two to clock a 4.12 early sectional and he took a commanding lead into the opening corner where he was followed by the improving Mallogs Marley in second.

Heading into the back straight and Agent Stanley held a four-length advantage as the Marie Gilbert trained son of Laughil Blake - Sidarian Pearl proceeded to set a frantic gallop in front with Stonepark Leo now beginning to wind up his challenge in third.

However, Agent Stanley was a dog on a mission and rounding the bottom two bends the impressive black, who now boasts eight wins from just fourteen starts, stayed on well to cross the line a length and a half clear.

Mallogs Marley kept the leader honest throughout and he finished at speed to close the gap in second, while Stonepark Leo landed the final qualifying position back in third. The time was a fine 28.40. (16.03 sec)

The remaining quarter final was the second of the night and it was Ballymac Belvult (Vulturi - Ballymac Belle) who overcame a tricky trap four draw to land the spoils.

Bombardier was ultra-impressive in winning his second-round contest and he was largely expected to follow up that victory for trainer Pat Buckley.

Indeed, it was Bombardier who trapped best of all from trap two as Darbys Delight, another impressive scorer last week, followed him up in second. Galloping into the opening corner and as Bombardier checked slightly on the inside, several runners were crowded out of contention as the Liam Dowling pairing of Ballymac Belvult and Ballymac Merlin, who occupied the last two positions heading into the bend, both benefited from the traffic to dart through an inside gap.

It was Bombardier who still held a narrow advantage into the back straight as Epic News and Ballymac Belvult both loomed large and it was the latter who blew holes in his rivals down the far side to take charge at the crown of the penultimate turn.

Bombardier was forced to check at this point, allowing Ballymac Merlin to slip through into second but from here, there was little doubt about the winner as Ballyma Belvult, a strong stayer, powered up the Limerick straight to record a convincing five length win over Bombardier, who came back for more later on.

The time was 28.42 and Liam Dowling will be doubly represented next week as Ballymac Merlin also qualified in third. (16.46 sec).

Trap Drawa and nominated Limerick Clubs (who are still in with a chance to share in the nominator prize-fund of €20,000)