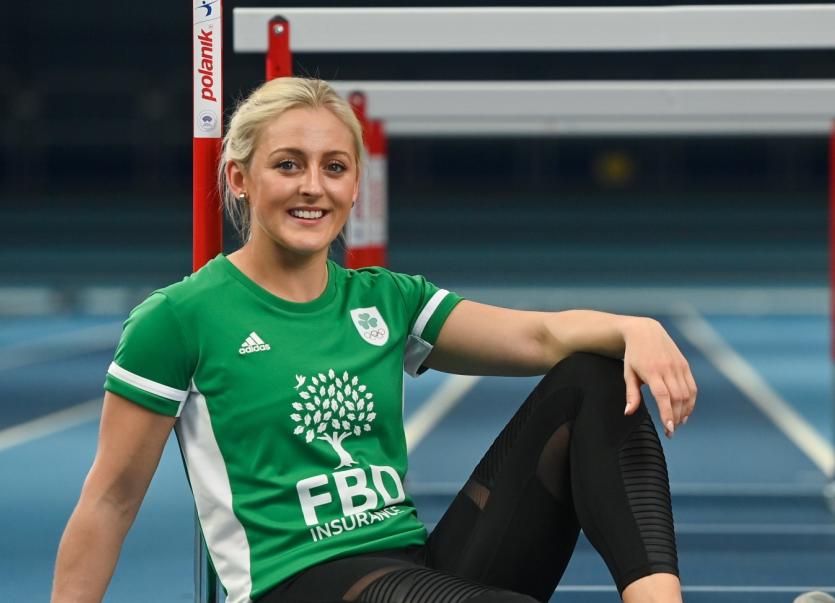 THE Olympic Federation of Ireland in association with FBD Insurance has today launched their new Olympic Schools Challenge, ‘Road to Tokyo’.

The Olympics take place in Tokyo later this summer. Lavin finished fourth in the 60m hurdles semi-finals at the European Indoor Championships in Poland in March in a time of 8.07, narrowly outside her personal best 8.03.

Speaking at today’s launch, Team Ireland athlete Sarah Lavin stated: “I am absolutely delighted to be a part of such a special launch today with the Olympic Federation of Ireland and FBD Insurance as part of their ‘Dare to Believe’ programme.

"The Olympic Schools Challenge ‘Road to Tokyo’ is one I would have loved to have taken part in myself when I was younger, and I know there are many pupils around the country who are already counting down to Day One of the challenge on May 4.

"When I was young, my dream was to represent Ireland and to compete at an Olympic Games and hopefully, through this challenge and the ‘Dare to Believe’ programme overall, we can inspire the next generation of Olympic athletes and start them off on their own sporting journeys.”

The ‘Road to Tokyo’ challenge is part of the Olympic Federation of Ireland’s ‘Dare to Believe’ schools programme and sees Team Ireland calling on schools and families across the country to join them on an interactive journey from Ireland to Tokyo from May 4 to May 31.

The Olympic Schools Challenge ‘Road to Tokyo’ offers schools across the country the opportunity to take part in a fun, interactive and educational journey with a host of Team Ireland athletes, as they begin preparations for the final months on the road to this year’s Olympic Games.

Schools and families can get involved by logging their physical activity and workouts, which convert to kilometres and move them closer to Tokyo each step of the way.There will be four stopovers en route for all involved, where students will learn about the Olympics, Tokyo, and get some insights and pro tips from Team Ireland athletes. There will be spot prizes, art challenges, and quizzes to make sure that all interests are catered for!

Now in its third year, ‘Dare to Believe’ - which was set up with funding from Olympic Solidarity and is supported by FBD Insurance - brings the Olympics into the classroom for over 5,000 children nationwide.

The school activation programme is championed and supported by the Olympic Federation of Ireland Athletes’ Commission, and was developed by 2008 Olympian, Róisín McGettigan-Dumas. It teaches primary school students about Olympic Values and Olympism through a curriculum that includes over 40 of the approved education methodologies.

The new Olympic Schools Challenge ‘Road to Tokyo’ will focus on exploring the joy of effort and the wider benefits of sport and staying active, with topics like teamwork, visualisation, motivation and goal setting discussed on the way

Speaking today, Róisín McGettigan-Dumas was looking forward to the new schools challenge: "We are really excited to be launching this new Olympic Schools Challenge for pupils, teachers, schools and families across the country, and to be inviting them to join us on the Road to Tokyo.

"This is a hugely exciting way to bring the Olympics and, in particular, this year’s Olympic Games, into the classroom for children across the country, and held build excitement for our athletes as the countdown to Tokyo continues.

"Through this programme, we are really looking forward to showing children across Ireland that they can dare to believe, and we hope that this challenge will not only inspire children to follow their dreams, but will also help to motivate them to get out there and get active with their classmates and families.

"We are extremely grateful for the support from both Olympic Solidarity and FBD Insurance, which allows this programme to continue to grow.”

Aileen Donoghue, Head of Marketing at FBD Insurance, stated: “FBD Insurance is thrilled to support Team Ireland once more with this fantastic new challenge. The Olympic Schools Challenge ‘Road to Tokyo’ is one not to be missed by schools around the country.

"As we move closer and closer to Tokyo, this challenge is a superb way for elite Irish athletes to truly connect with children across the country, and help them to get active while also learning all about the Olympic Games and Olympic values.

"We are really excited to follow their journeys across the world through the virtual tracker that will lead them to Tokyo, and we know that the Team Ireland athletes will be thrilled with their support as they begin their final preparations for this year’s Olympic Games.”