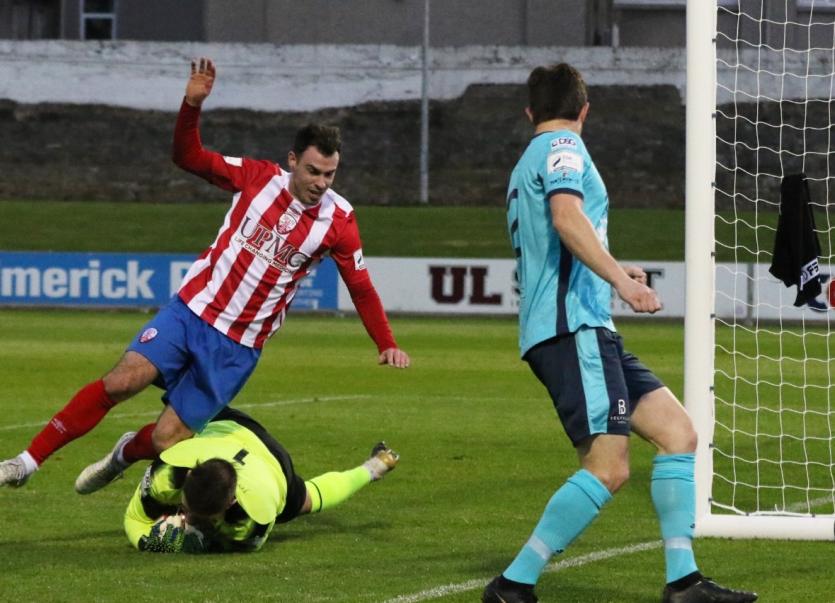 TEN-MAN Treaty United extended their unbeaten start to their inaugural SSE Airtricity League First Division season when playing out a 1-1 draw with Cobh Ramblers in an incident-packed Munster derby at the Markets Field on Friday night.

For the third successive week, Treaty had a player dismissed, this time it was Charlie Fleming who saw red just after the half hour mark.

Treaty United led 1-0 at that stage after former Limerick senior footballer Sean McSweeney fired the home side in front after 14 minutes.

The Limerick side conceded their first goal in 230 minutes of league action five minutes into the second half when Darryl Walsh scored from a sweetly struck volley.

However, the goal wasn't without its share of controversy with the Treaty players and management team adamant that goalkeeper Tadhg Ryan had been fouled as he punched the ball clear prior to the goal being scored.

Despite being a man down, Treaty showed admirable resilience and could well have won the contest late on, only for substitute Edward McCarthy to see his effort cleared off the line.

The point brought Treaty's tally for the season to five after three games, while visitors Cobh were picking up their first point of their league campaign after two earlier defeats.

The game was watched by Galway Utd manager John Caulfield whose side will provide the opposition in Treaty United's next fixture at Eamonn Deacy on Friday night next, 7.45pm

Treaty United manager Tommy Barrett made three changes to his starting line-up from the side which defeated Wexford seven days earlier.

Goalkeeper Tadhg Ryan and Charlie Fleming both returned to the starting line-up from injury to replace Shane Cusack and the suspended Clyde O'Connell. Sean McSweeney returned from a one match ban to replace Ed McCarthy.

Adding an extra sprinkling of spice to the game was the fact that a number of players on both sides had played with the opposition in recent seasons. Four Cobh players previously played for Limerick FC, while three members of the home side's starting line-up previously played at St Colman's Park.

Despite the visitors' bright opening, it was Treaty United who took the lead when former Limerick senior footballer Sean McSweeney fired home after linking up with Joel Coustrain. McSweeney's effort look like it took a deflection, but the most important thing was that the ball found the bottom right corner of the right.

After Cobh lost Stephen O'Leary to injury, the home side came close to adding a second goal. However, captain Jack Lynch headed over from eight years out after he made good contact with Marc Ludden's superb delivery from the right.

Treaty Utd had a player dismissed for the third successive game just after the half hour mark. This time it was Charlie Fleming, who was initially booked for simulation inside the penalty area and the former Cork City player was then shown a red moments later after squaring up to one of the Cobh players.

The visitors did draw level seven minutes into the second half, thanks to terrific strike from Darryl Walsh. However, Treaty Utd's backroom team believed the goal should have been chalked off, believing 'keeper Tadhg Ryan had been fouled in lead up to goal as he punched ball clear.

The goal ended Treaty's record stretching 230 minutes of not having conceded a goal in their inaugural season in the SSE Airtricity League First Division.

Treaty United came oh so close to grabbing a lead goal in the 79th minute. The hugely influential Marc Ludden played in a terrific ball in from the left which substitute Edward McCarthy got on the end of. However, while he got an excellent first touch on the ball, he was unable to bundle it into the net and it was cleared off the line by Cobh goalscorer Walsh.

*A minute's silence was observed before kick-off as a mark of respect to the late Des Fitzgerald, of the Limerick Fire and Rescue Service, who was laid to rest on Thursday.