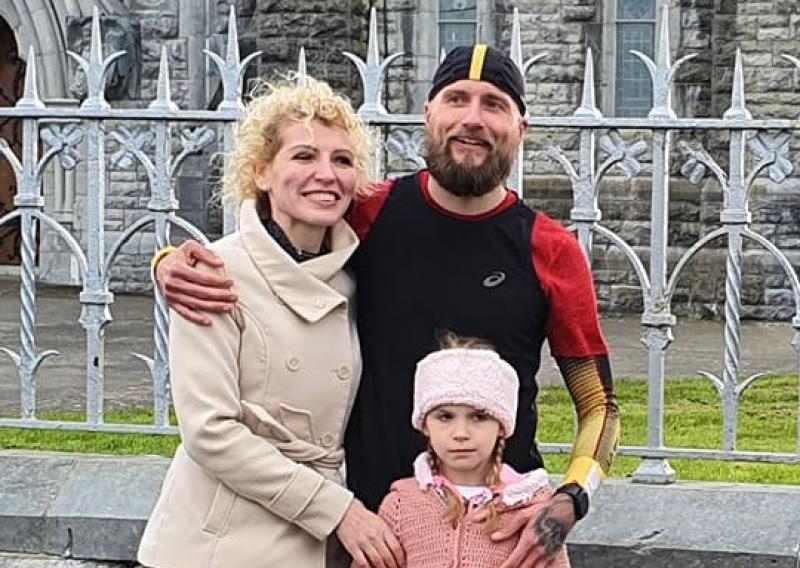 Krzysztof Sikorski, of Kilmallock AC, who completed 100km in a time of 11 hours 56 minutes and 33 seconds, pictured with his wife Joanna and daughter Karen

IT is hoped that this can resume later in the month in line with government Covid 19 related guidelines.

DURING the month of March we ran a virtual 4 mile challenge with other clubs in Limerick.
Members of clubs in Limerick had the option to submit a race time for the 4 mile distance, juveniles could submit a 1km time.

The idea behind it was to give an incentive to club members to start training or continue training during lockdown.

Garvan and Eavan Lyons of West Limerick A.C. recorded times of 3:36 and 3:39 respectively.
There was a good response to the 4 mile challenge from a number of clubs.

Kevin O’Grady of Dooneen A.C. was the fastest over the month with a time of 20: County Board for the National Athletic and Cycling Association for Limerick.

The Army would be represented on the Board by Lieutenant A. Noonan. Remaining Clubs would hold meetings to select their representatives at a later date 53. The first woman was Helen Meehan of Bilboa A.C. in a time of 26:49.

WELL done to all who took part in the Limerick Carers Association Virtual 5K.
Big congratulations to Krzysztof Sikorski, of Kilmallock AC, who completed 100 Kilometres in a time of 11 hours 56 minutes and 33 seconds. Starting on Sunday at 6am he completed 20 5K laps around Kilmallock.

Well done also to Irish 24 hour champion Paula Wright who completed the same distance in a time of 9:47:50 in Nenagh .

Representatives of the Clubs of Limerick City and County met in Cruises Hotel for the purpose of forming a County Board of The National Athletics and Cycling Association in Limerick.

THE outgoing Chair of Limerick B.L.E. Dick Power lamented the inadequate facilities within the City and stated that it needed a cinder track or a high quality grass one (A Cinder Track had been used at the 1964 Olympics).

He paid particular tribute to Tony Moloney (Limerick AC) on his 120/440 yard double at the National Championships and to John Cregan (Granagh) on his ‘ankle display’ at the 3000m Steeplechase.

Redgate AC competed in the Limerick Championships in the 1960’s before ‘switching’ to Clare.
Their annual 4 Mile race attracted many athletes from Limerick each November.