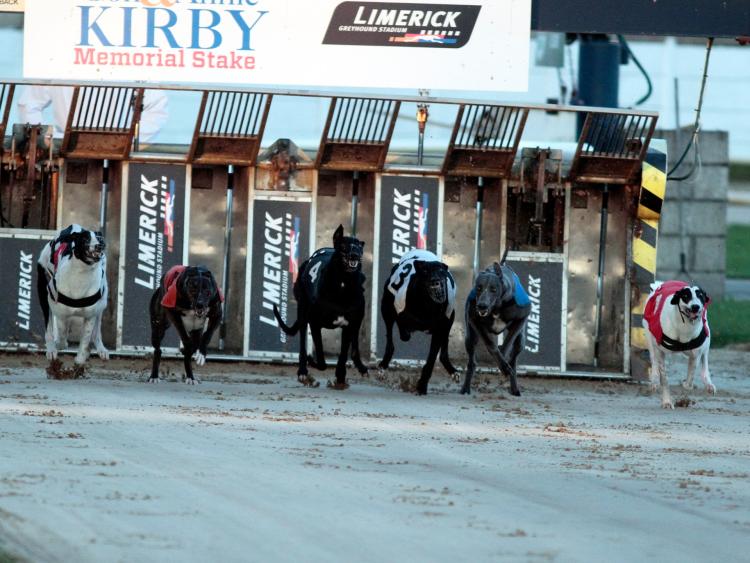 AFTER a number of sensational opening round performances in the 2021 Con & Annie Kirby Memorial 525 at Limerick greyhound stadium, the second round action continued live on Talking Dogs TV last Saturday night.

The most eye-catching heat of the night was heat four which included the outright market leader Explosive Boy. However, after a slow start it was Deadly Destroyer, owned by Garry Hannon and trained by Laois handler Karol Ramsbottom who came home in front.

The time was 28.52 and he saw off De Machine by half a length, with Explosive Boy also qualifying in third.

The fastest run of the night came in heat six from Fabolous Azzura. Owned by David Firmager and trained by Graham Holland, she maintained her unbeaten run in the stake as she crossed the line three lengths clear of Valegro in second. The time was 28.26 as Ballymac Ariel also qualified in third.

In terms of local success, Bombardier landed the opening heat of the night for Cappawhite trainer Pat Buckley. Leading all the way, Bombardier recorded a six length victory over Benalmadena Roxy in second, with Epic News also qualifying in third. The time was 28.31.

Local Limerick trainer Neilus O’Connell landed heat three of the night when Darbys Delight came from off the pace to beat Ballymac Merlin by half a length. The time was 28.42 as Ballymac Belvult also qualified back in third.

In other heats, Scarty Yank was most impressive in leading from the outset for joint owners Gary Dineen and Patrick Riordan. Crossing the line four lengths clear of Mallogs Marley in second, the time was 28.31. The third qualifier was Broke With Hope in third.

There was a shock on the cards in heat two of the night as the Marie Gilbert trained Agent Stanley held off Luminous Light to win by half a length. The time was 28.56 and the final qualifier on this occasion was One Time Only in third.

Heat seven was landed by Envoi, jointly owned by Paula and Maurice Heffernan. Taking up the running at the third bend, Envoi held off Flyers Iniesta to land victory by a length, with Zafiro a further three lengths back in third. The time was 28.62.

The final heat of the night returned another shock result as Stonepark Leo got the better of impressive first round winner, Singalong Sally.

Trained by Tipperary man Mark O’Donovan, Stonepark Leo led all the way to win by two and a half lengths in a time of 28.78. Singalong Sally was second and Rural Star got up to take the third qualifying position.

The action continues this Saturday and can be viewed online on the newly launched Talking Dogs TV platform.  Full details of racing and how to access  the coverage available on www.grireland.ie