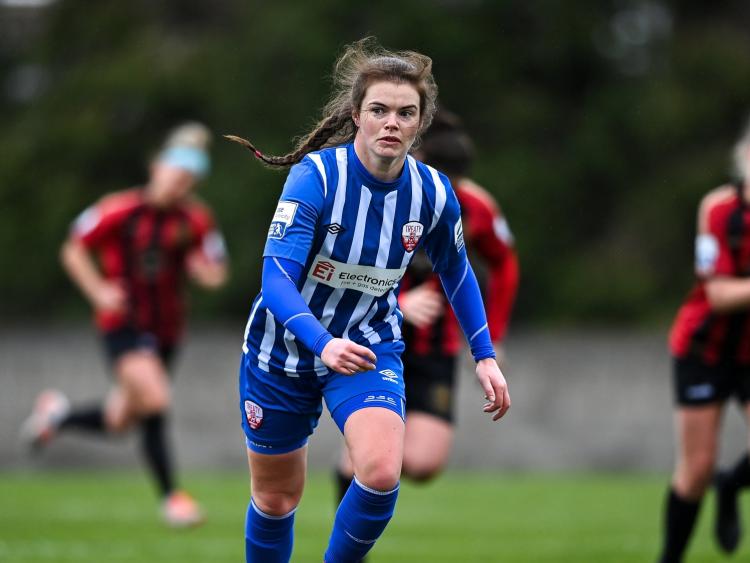 Rebecca Horgan, who scored a brace of goals in Treaty Utd's 3-3 draw with Athlone Town in the WNL on Saturday night

TREATY United women's side produced a battling display to secure an exciting 3-3 draw with Athlone Town in the Women's National League at Athlone Town Stadium on Saturday night.

Neither side deserved to lose this thrilling game as the momentum swung back & forth throughout the 90+4 minutes at the Midlands venue.

The result was a timely boost for Niall Connolly's Treaty side which had suffered a disappointing 6-2 defeat to Bohemians in their opening WNL fixture a week earlier.

Second half just about to kick off here as the sun goes down in Athlone Town Stadium.#TreatyUTD #ThumbsUpForTreaty pic.twitter.com/BBVfdu7Vdr

The Horgan sisters starred for Treaty United, with Rebecca getting them going on 15 minutes before Aoife found the back of the net three minutes later and then Rebecca got a second on 36 minutes.

Athlone had actually started the better of the two teams with Mo Nerney firing in after 11 minutes. Treaty then scored then twice before Emma Donohoe pulled one back and they conceded again.

A superb goal from Katelyn Keogh, who raced onto a long pass from Kayleigh Shine, made sure of the draw on 63 minutes. Jemma Slattery was sent off for the visitors shortly after that after picking up two yellow cards.

Next up for Treaty United is a home game against Wexford Youths at Jackman Park on Saturday next.