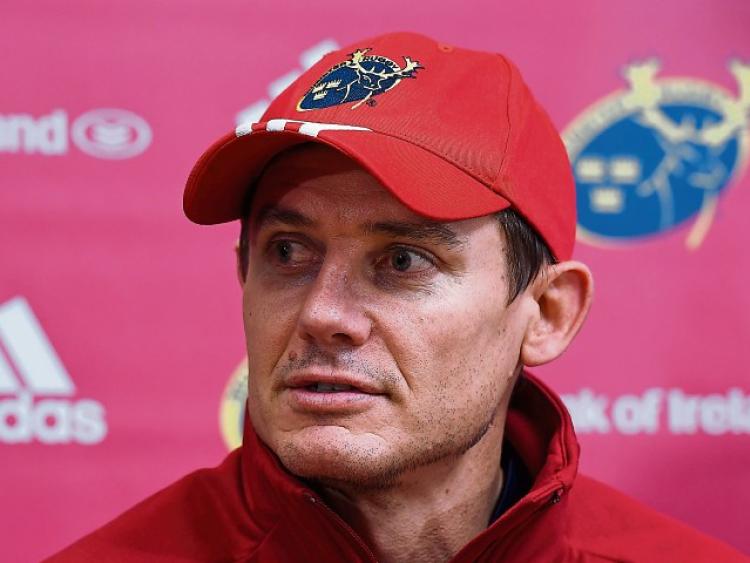 MUNSTER senior coach Stephen Larkham admitted this Tuesday that up to half their play were still struggling to get over the disappointment of last Saturday's Guinness PRO14 final defeat to Leinster at the RDS.

The Munster squad is stepping up their preparations for this Saturday's mammoth Heineken Champions Cup last 16 clash with Toulouse at Thomond Park, 3pm.

Larkham is confident that all the Munster players will be in the best possible state of mind by the time this weekend's big showdown with the French champions comes around.

Larkham said: "Some of the guys are still struggling, some of them are just about over it (Saturday's defeat). It's tough, we've had a couple of games against Leinster that haven't gone our way and we've been the team that has pushed Leinster more than anyone else in the big games with full squads out there.

"We're still picking up our mental state at the moment. It's expected and by the end of the week, we'll have built nicely.

"We're not trying to prove anything to anyone outside of ourselves. We want to play the game we want to play. There were facets of that game that came out well at the weekend but it wasn't a complete performance. We've looked at our fundamentals and want to make sure we're back to those at the weekend."

Larkham said South African forward Jason Jenkins who will join Munster next season will bring further experience to the pack as well as a versatility.

Larkham said: "First and foremost, experience. Springboks, Springboks A, Japan, playing for the Bulls in South Africa. He's a South African forward, he knows the tough stuff, he gives us coverage in all positions in the back five.