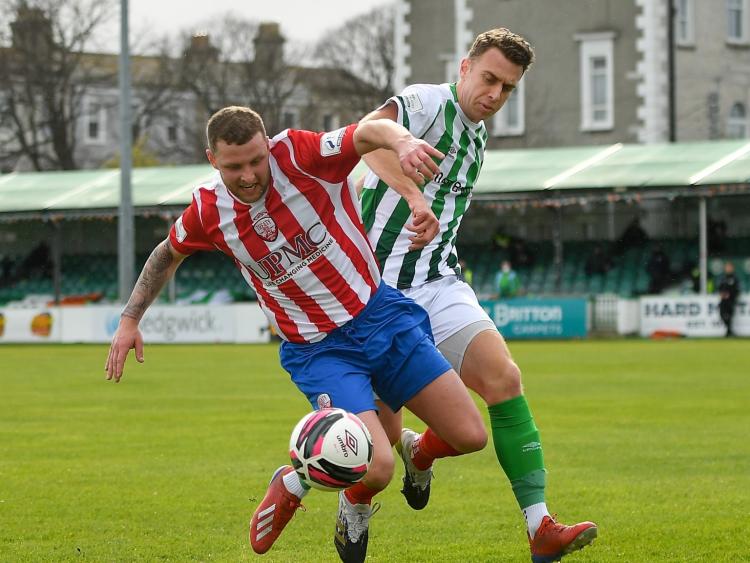 TREATY Utd picked up a deserved point in their historic first ever senior men's SSE Airtricity League First Division fixture as the Limerick side played out a 0-0 draw with a fancied Bray Wanderers side at the Carlisle Grounds on Sunday afternoon.

Manager Tommy Barrett will be pleased with the battling display from his recently assembled side in blustery conditions.

Treaty were forced to play the final quarter of the league opener with 10 players following the dismissal of the otherwise impressive Sean McSweeney for picking up two yellow cards,

Both sides struggled to create much by way of clear-cut scoring chances over the 90 minutes, with a draw proving a fair result.

Treaty will take plenty of positives from the game as the players fitness levels continue to improve.

Next up for Treaty United is the visit of Wexford to the Markets Field on Friday night, 7.45pm.

Treaty United were forced to line out without the services of Clyde O’Connell who was serving out a one match suspension, while Joel Coustrain missed out because of an injury.

The strong wind made for difficult playing conditions by the seaside.

Richie O'Farrell went closest for the home side, but he was denied by a brilliant reaction save from Tadhg Ryan after just seven minutes.

The game remained scoreless at half-time, with defences holding sway as the sides struggled to create any clear-cup openings in the blustery conditions.

Treaty manager Barrett made a substitution just after the hour mark with Ed O'Dwyer replacing Kieran Hanlon in attack.

Treaty suffered a big blow in the 65th minute when McSweeney was sent off after picking up his second yellow card of the game.

Goalkeeper Tadhg Ryan did superbly to react quickly to a threatening Bray attack in the 68th minute when advancing from his goal line to snuff out the danger.

Treaty were pretty comfortable over the remaining minutes of the contest to claim a deserved share of the spoils.