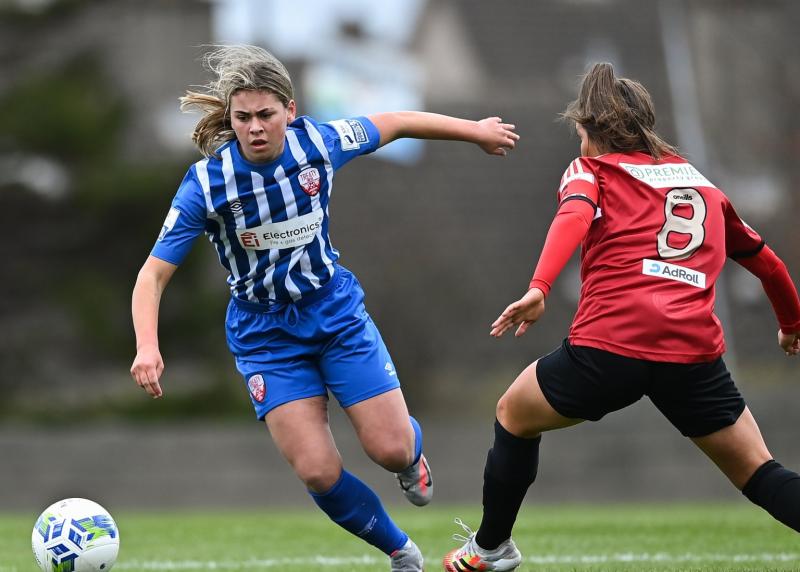 Treaty United's Jenna Slattery gets past Sophie Watters, of Bohemians, during the SSE Airtricity Women's National League match at the Oscar Traynor Centre in Coolock on Saturday afternoon

LIMERICK'S Treaty United were left to rue a poor start as Bohemians WFC ran out 6-2 winners of their opening day Women's National League fixture at the Oscar Traynor Centre on Saturday afternoon.

Treaty conceded three times inside the opening 17 minutes as Bohs' took a strong grip on the contest with Bronagh Keane firing home in the seventh and ninth minutes, while Naima Chemaou was also on target just after the quarter hour mark.

The Limerick side trailed 4-1 at the break, with the exciting Aoife Cronin scoring for Niall Connolly's Treaty Utd side on 42 minutes.

Treaty rallied at the start of the second hit with Aoife Cronin unlukcy to see an effort hit off the post, before Shannon Parbat pulled a goal back for the visitors who trailed by just two goals, 2-4, after 57 minutes.

However, any hopes of a Treaty United revival were ended when Aoife Robinson struck for the first of two goals for Bohemians just after the hour mark.

Treaty are also on the road next Saturday, April 3, when facing Athlone Town on the second weekend of the league season. The Limerick side will host Wexford Youths at Jackman Park in their opening home league fixture on Sunday, April 18 at 2pm.