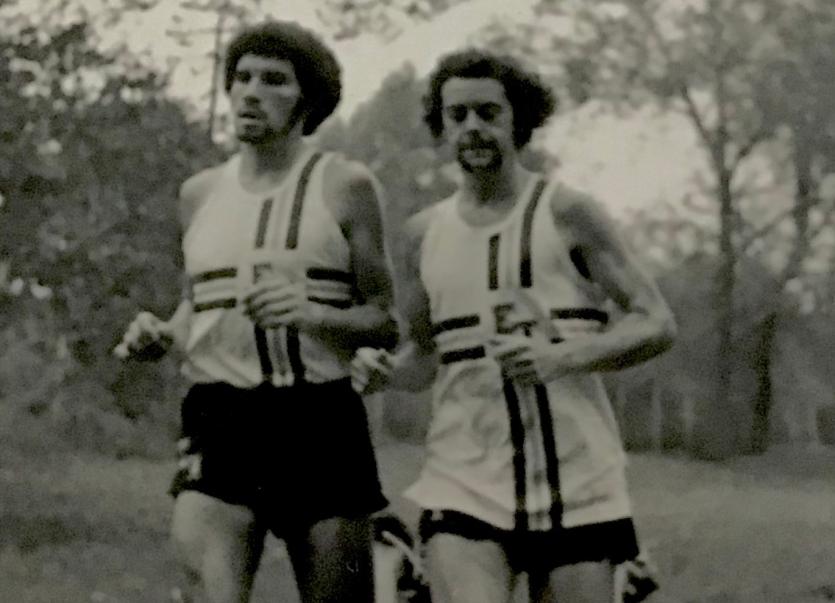 Eddie Leddy, left, and Neil Cusack competing in a cross-country race in Atlanta, Georgia in November 1973

NIALL O’Callaghan (West Limerick) has gone straight into the Leaderboard in first place on 21:09 followed by clubmates Ger Guina (23:30) and Mike Sheehy (24:46).

The An Brú AC Juvenile 1 Mile League continues. At time of print it was being lead by ‘The Villians’ Check out Limerick Sports Partnership for details of various on line programmes.

Munster’s sole successes in the individual Championships were achieved by Rosemary Bracken, of Croom Vocational School, and Mary Culhane, from Scoil Mhuire.

In the Intermediate Championships on the third and final lap Rosemary Bracken was 15 yards adrift of Caroline Peppard of Mercy College Coolcock when the Dublin Girl who had been suffering from influenza collapsed and had to retire.

Miss Bracken availed of the opportunity and strode away to victory. Mary Culhane’s victory was equally as sensational.

The two leaders took a wrong turn and quick to seize advantage the Newcastle West girl plotted her course for home. Marcia Cotter of St. Joseph’s Abbeyfeale had to be content with second place behind Irish International Carol Meagan but had ample compensation when she led her school to victory in the team event.

The wining trio was completed by M. Lane and B. Flynn. The winning Scoil Mhuire (Newcastle West) Team in the Junior event was M. Culhane, D. Riordan and M. O’Riordan while Emily Blake, Angela Blake and Annette O’Halloran comprised the successful Presentation squad in the Intermediate Championships.

In the Boys section the only Limerick School to feature in the medals was St. Munchin’s College who were placed third in the Senior Championships.

Later in the year, Neil Cusack, of Limerick AC, would finish second in the Dublin City Marathon to Dick Hooper in a time of 2:20:40.

The former St Munchin’s College student won Boston marathon in 1974 in a p.b. time of 2:13:39. He represented Ireland at the 1972 and 1976 Olympics. He also attended East Tennessee State University and in 1972 was the first Irishman to win the American Colleges National Cross Country Championship (N.C.A.A.).