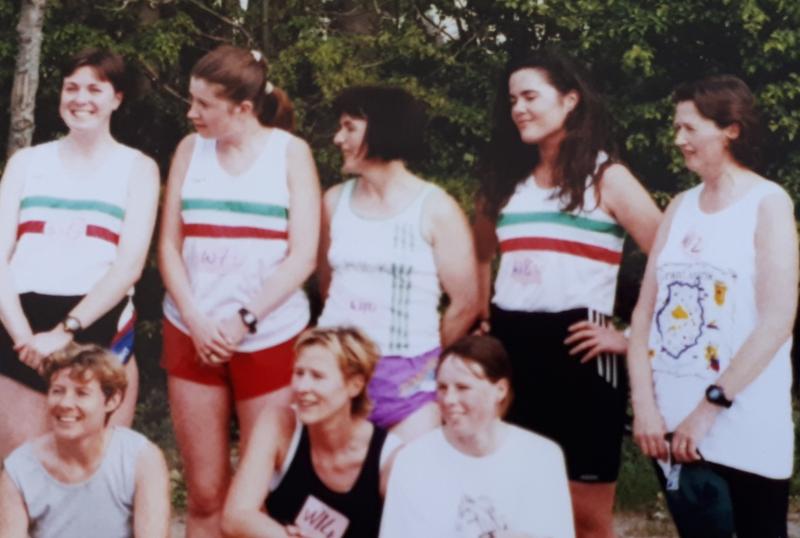 The Limerick AC team at the 1997 Limerick County Road Championships

NEARING the end of the final weekend Niall O’ Riordan (An Brú) continued to lead the 5K on 15:35 with Niall O’Callaghan (West Limerick) second on 15:38.

Sorcha Nic Domhnaill (Donore Harriers) is now first woman on 34:46 with Breda Gaffney next on 38:14. Kealan and Eavan Lyons (both West Limerick) continue to lead both the 1 and 2K.

Well done to all who’ve taken part in this and other virtual events recently.

On line
LIMERICK Sports Partnership are starting a ‘Desk to 5K’ programme. Check out the Athletics Ireland website for details of latest webinars.

However, his victory was not enough to prevent West Limerick taking the team title for the first time in 5 years.

Behind Mullane’s winning time of 20:51, was Tom Fitzgerald (West Limerick) on 21:14 who pulled away from John Murphy (Reenavanna Harriers) in the closing stages (21:22).

West Limerick finished on 19Pts with Limerick AC second on 25 and Emerald in third.

Limerick AC on 7pts took the women’s team title from West Limerick on 14.

1999
KEVIN Burke of Dooneen recorded no less than three U18 Championship best performances at the Munster Indoor Championships in Nenagh.

Anne O’Malley of Bilboa also produced a record breaking performance in the U16 walk where she finished a comfortable winner. The third Limerick athlete to set a new record was Caitríona McMahon of Coolyroe, a convincing winner of the U14 walk.

A week later former National Marathon Champion John Griffin (St. John’s Tralee) took the lead from the start and won the Adare 10K in a time of 31:22. He was followed in second by Desmond Casey (Millstreet) in 33:04 and Ger Mullane in third (33:18).