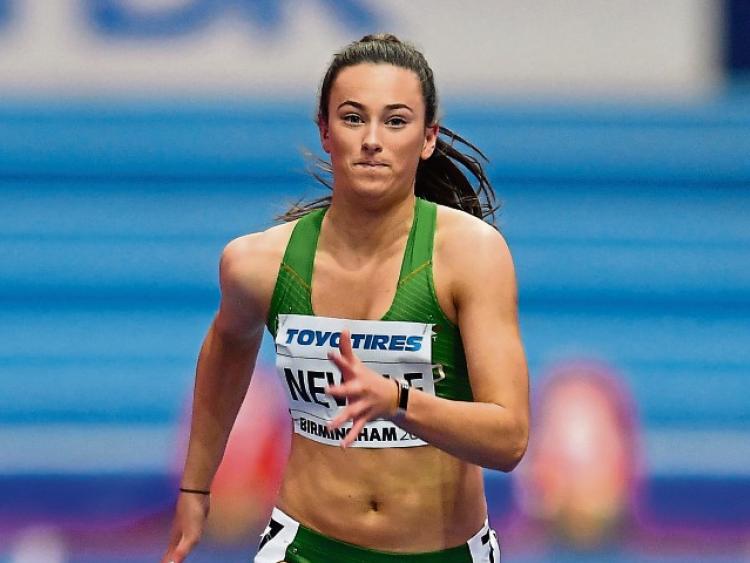 TWO Limerick athletes have been included in a bumper Irish team of 24 athletes who have been selected for the European Indoor Athletics Championships in Poland on March 5-7.

Monaleen's Ciara Neville, of Emerald AC, will compete in the women's 60m at the prestigious championships at  Torun next month.

Neville, who is coached by Noelle Morrissey, equalled her lifetime best indoors of 7.30 seconds to impressively win the 60m sprint at the Vienna Indoor International in Austria last month. It was the 21-year-old's first race in 11 months.

Neville's time of 7.30 is the joint second fastest 60m ever run by an Irish woman.

Neville reached the semi-final of the 60m in the European Indoor Championships in Belgrade in 2017, in her first international senior championship when aged 17.

Meanwhile, Sarah Lavin, from Lisnagry, also of Emerald AC, has been selected to compete in the women's 60m hurdles at next month's European Indoor Athletics Championships.

Lavin achieved the qualifying time for the European Indoors with an impressive third place finish in the 60 hurdles at the World Indoor Series Silver Meet in the Czech Republic last month.

The Limerick hurdler clocked an impressive 8.18 for the event in Ostrava to achieve the qualifying mark.

The in-form Lavin continued her blistering early season form in the first series of the 60m Hurdles at the Irish Life Health Elite Micro Meet at the Sport Ireland National Indoor Arena on Saturday.

Lavin equalled her second fasted time of 8.21 in a blistering display in the 60m hurdles.

Several of our top performers from the 2019 edition of the European Indoor championships return in 2021, including medallists Mark English and Ciara Mageean, along with semi-finalist Phil Healy, while there are several performers who can additionally target a final or better, most notably 800m record breakers Siofra Cleirigh Buttner and Nadia Power, along with Andrew Coscoran, Sean Tobin and John Travers.

Athletics Ireland High Performance Director Paul McNamara said: “It has been a remarkable indoor season so far in 2021, for many reasons, and this is reflected in both the size and quality of the team travelling to Poland.

"Despite higher qualification standards and fewer opportunities to compete, Irish athletes nailed their opportunity when it presented itself, most notably this past weekend at the Irish Life Health Elite Micro-Meet, and we now have an unprecedented 24 athletes who have earned selection for the 2021 European Athletics Indoor Championships, with many more who have posted qualification standards missing out due to the 3-athlete-per-event limit”.