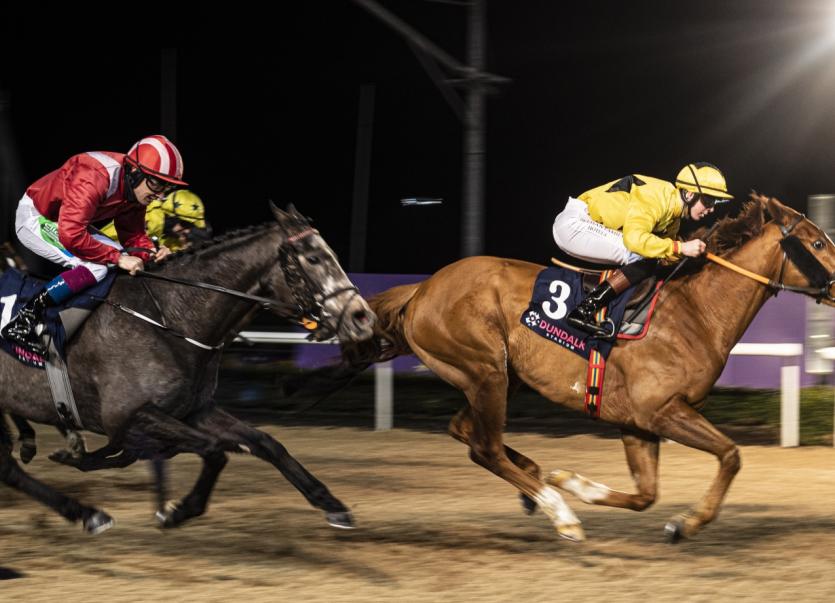 LIMERICK jockey Chris Hayes is just two shy of 750 winners in Ireland after his success at Dundalk last week.

The Shanagolden jockey's success came on Chateau Musar in the second division of the 12-furlong handicap on at Dundalk on Wednesday.

The four-year-old has more than paid his way over the winter months and was recording his third success in five starts at the venue since November.

Hayes has been in the saddle on each occasion and he got the 11/4 favourite home three-parts of a length from the Joseph O'Brien-trained 16/1 chance Port Lockroy on this occasion.

The winner is owned and trained by John Geoghegan in Maynooth, Co Kildare.

Ballingarry pilot Billy Lee and trainer Conor O'Dwyer won the concluding conditions’ race but needed the help of the stewards to do so.

The trainer’s Barretstown, named after the Co Kildare-based children’s charity, finished a short-head second to the Ado McGuinness-trained Star Harbour but the placing were reversed after a lengthy enquiry.

O’Dwyer commented on his Billy Lee-ridden winner, “It’s not a nice way to win obviously but he deserved it too in fairness as he’s done nothing wrong. The Ladies First Syndicate have him and they’ll have great fun with him for the summer. Barretstown get proceeds out of his winnings so it’s all good.”

At Dundalk on Friday evening, Chris Hayes rounded off a memorable day for local trainer Ado McGuinness when winning the eight-furlong fillies’ maiden on the Susan Barton-owned Thrumps Dream.

The 100/30 chance scored by a comfortable length and a quarter from the Billy Lee-ridden 3/1 favourite Burgoo Alley which is trained by Paddy Twomey and was the Shanagolden jockey’s 748 winner in Ireland.

Quin trainer Paddy Hassett won the opening five-furlong handicap under Declan McDonogh. Sent off at odds of 7/2 favourite, the five-year-old held off the late surge of the Wesley Joyce-ridden Misterio, the young Moyross apprentice pipped by just a head on his first racecourse ride for Johnny Murtagh.

Abbeyfeale apprentice Paddy Harnett gave trainer John Geoghegan his second winner of the week when taking the second division of the eight-furlong handicap.

The 9/1 chance had a little in hand as he accounted for the Edward Lynam-trained Darkest Hour by three-parts of a length.