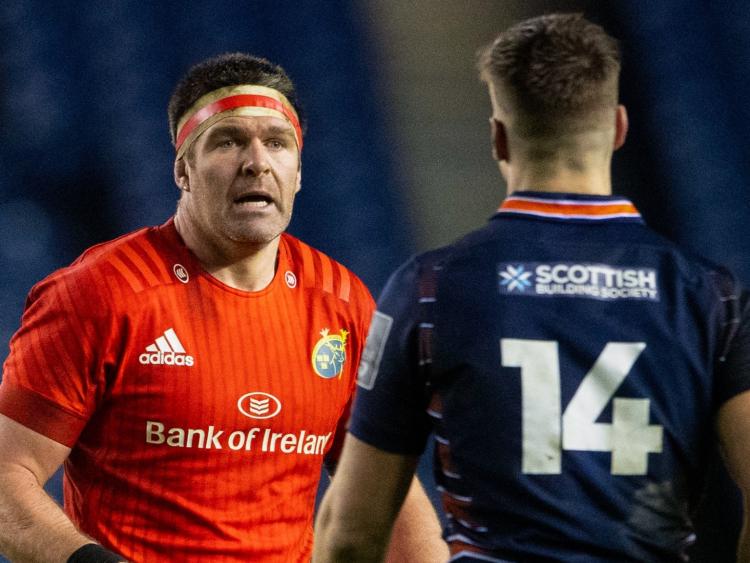 Munster's long-serving second-row Billy Holland and Jack Blain, of Edinburgh, greet each other at full-time at Murrayfield on Saturday night

NEXT month's home fixture with second-placed Connacht at Thomond Park is set to be a key outing for Munster in their bid to secure a first Guinness PRO14 final berth since 2017.

Conference B leaders Munster enjoy a nine-point advantage over Connacht with now just four games to go in the PRO14s regular season. Johann van Graan's Munster side, who defeated Edinburgh 22-10 at Murrayfield on Saturday, host Connacht at Thomond Park on Friday, March 5. Before then Munster take on Cardiff Blues in Wales this Friday, 8pm.

Van Graan said: “Look, Connacht have been playing really good rugby. We want to keep that gap between the two of us. There is four games left in the season now and we know that we have got one more away one against Cardiff next Friday night, which is another tough one.

“Then we finish off the season with three games at home against Connacht, the Scarlets and Benetton. So we’ll take this win tonight. I thought it was overall a really good performance at the start of a big block of rugby for us.”

Van Graan described Munster's victory over Edinburgh in the Scottish capital as a 'really good win' for the side.

He said: "We knew it was going to be a tough battle. We started off to defend our own goal line pretty well. We got a few turnovers, our scrum and our maul went really well and it gave us field position.

"We were up by quite a bit at half time. They scored their try. We came straight back and at 22-10 a whole lot of scrum sets there under our own sticks. I think we managed that really well. We spoke about desire this whole week, it was a really, really good away win for this team."

Van Graan also paid tribute to Man of the Match in their win over Edinburgh, Billy Holland, who had his 240th appearance for the province in the fixture.

“Look, phenomenal. What a man. One of our leaders in our group. One of the quiet men, but he is always there. I think one day when he leaves you’ll miss him because ever week he turns up at training.

"It’s pretty special for us as a group to give him that win tonight, to get that second place with Rog (Ronan O'Gara), it’s big players in the history of Munster and he’ll certainly go down as a Munster legend."