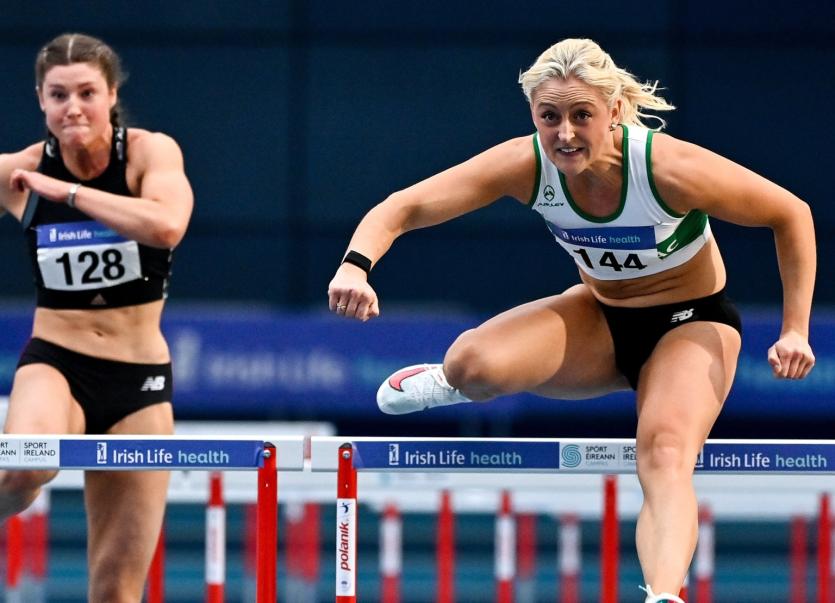 Limerick's Sarah Lavin, of Emerald AC, right, on her way to winning the Women's 60m Hurdles during day one of the Elite Athlete Indoor Micro Meet at the National Indoor Arena on Saturday

LIMERICK athlete Sarah Lavin continued her blistering early season form in the first series of the 60m Hurdles at the at the Irish Life Health Elite Micro Meet at the Sport Ireland National Indoor Arena on Saturday.

Lisnagry athlete Lavin, of Emerald AC, equalled her second fasted time of 8.21 in a blistering display in the 60m hurdles.

The European Athletics Indoor Championships are due to take place in Torun, Poland from March 5 to 7.

Both Lavin and O'Connor athletes showed tremendous consistency by following up with solid performances in series 2 of the 60m Hurdles an hour later in their second run at the Irish Life Health Elite Micro Meet on Saturday. Both were just outside their opening times, with Lavin posting an 8.22, while O’Connor came home in 8.57.

@sarahlavin_ of @EmeraldAC continues her blistering early season form with a 8.21 in the 60m hurdles. @kateoc2000 of Dundalk St Gerards AC) came home in 8.59 as she builds towards future combined events. https://t.co/raTXnSBffR pic.twitter.com/0s41YgRU9O

Elsewhere on Saturday, the afternoon session got up and running with the Women’s 1500m where Michelle Finn (Leevale AC) took on pace making duties.

Limerick athlete Amy O’Donoghue, of Emerald AC, was hot on the heels of Finn for the first 1000 meters but unfortunately had to step out of the race.

2019 European Indoor Bronze Medallist Mark English (Finn Valley AC) stole the show as he went on to break his own National 800m Indoor Record of 1:46.82 in a stunning finish with Cian McPhillips (Longford AC). The Donegal man crossed the line in a record breaking 1:46:10, with McPhillips clocking 1:46.13 to claim an over 6 second PB, as well as the Under-20 and Under-23 800m Indoor records in the process.

Day 2 of the Irish Life Health Elite Micro Meet will get underway with a bang at 11.40am on Sunday as the Women’s 400m field take to the start-line.

A live stream is available on the Athletics Ireland YouTube Channel.