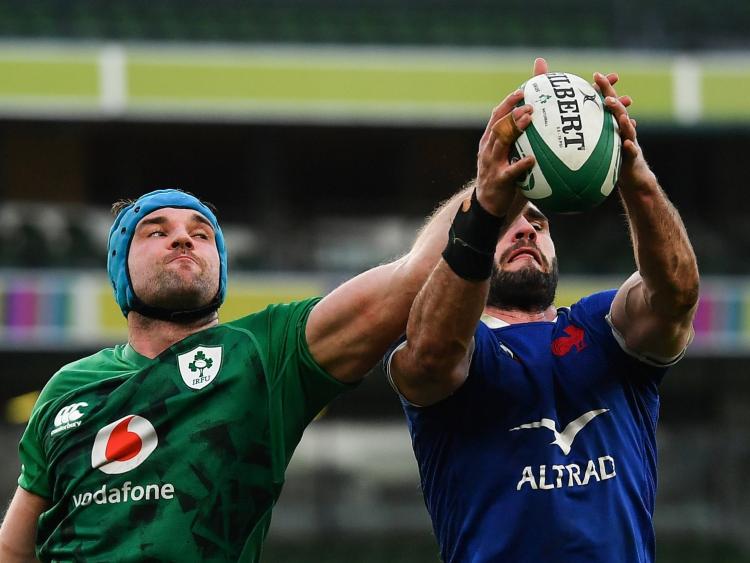 IRELAND have lost their opening two Guinness Six Nations Championship fixtures for the first time after succumbing 13-15 to France at the Aviva Stadium on Sunday afternoon.

To their credit, Ireland, minus several first choice players, including Conor Murray, Jonathan Sexton and James Ryan due to injury, fought bravely against their fancied opponents before ultimately coming up short in a fiercely competitive fixture.

Ireland lacked the creative guile and craft necessary to breach the French defence sufficiently, despite enjoying the majority of the possession.

This was Ireland's first time to lose to Les Bleues in Dublin in the Six Nations in 10 years.

The rain had stopped and the wind had relented somewhat by kick-off time. Both teams looked nervy in the opening 10 minutes, making several unforced errors.

France had the opportunity to hit the front in the 11th minute when Ireland were penalised after a line-out close to half-way. However, France out-half Matthieu Jalibert was off target with his penalty attempt.

Ireland began to enjoy more possession as the first quarter wore on. The home side put up some towering 'garryowens' on French full-back Brice Dulin in the blustery conditions.

So close for Ireland!

It looked like James Lowe had scored the opening try, but his foot touched the line before grounding.#IREvFRA #GuinnessSixNations #VMTVRugby pic.twitter.com/lVzYuP2mBj

The home side did have the opportunity to hit the front in the 17th minute, but out-half Burns was off target with his poorly struck penalty attempt from distance.

The Irish out-half made amends in the 19th minute when kicking the home side into a 3-0 lead after France were penalised at the breakdown.

Ireland were desperately unfortunate not to be awarded a try  in the left corner a minute later only for the match officials to rule that James Lowe's right foot had touched off the touchline before grounding the ball. It was a very tight call.

Two minutes later the Irish players were under their own posts as France struck for their opening try through flanker Charles Ollivon. It was one of those out-of-nothing French tries which the visitors tend to produce.

Matthieu Jalibert added the conversion and a 39th minute penalty goal after Ireland prop Cian Healy was harshly penalised for not rolling away at ruck time.

The visitors retired to the dressing room 10-3 at the interval.

Ireland were fortunate not to fall further behind at the start of the second half. French hooker Julien Marchand made a powerful break through the heart of the Irish defence before being stopped a few metres short of the try-line.

However, as their scrum-half Dupont looked to ship the ball left with numbers out there, the ball collided with the head of second row Paul Willemse before falling to safety.

France were not to be denied in the 55th minute, however, when France's industry and endeavour was rewarded when full-back Dulin sent winger Damian Penaud over in the right corner.

The conversion was missed, but the visitors lead was out to 12 points at 15-3.

ireland were back in the game two minutes later when replacement hooker Ronan Kelleher seized on a line-out spill inside the French '22 before scampering over. It was the Leinster players' first senior international try.

Byrne's successful conversion made it a five-point game, 10-15.

Ireland further reduced France's lead to two points, 13-15, in the 65th minute when Byrne landed his second successful kick at goal, this time a penalty, after the visitors were penalised for a high tackle.

Ireland fought bravely in the final minutes in a desperate bid to create the opening which might lead to a game-changing score. However, France held on to victory to continue their winning ways in the Championship.