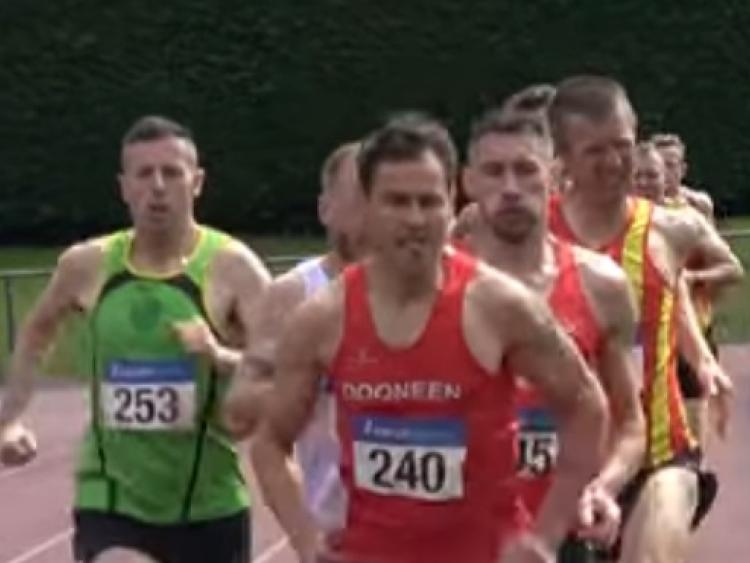 Dooneen ACs Shane O'Sullivan takes the field along on the track

What led you to take up the sport?
“I had a keen interest in athletics as a teenager and raced many Community Games representing Wexford in Mosney in the All-Ireland.

I then did not run for 20 years! I was a keen cyclist, but after a nasty fall and a broken collarbone doing the 120km Leinster Loop race reignited my passion for running.

“I went jogging initially just to stay fit and keep the weight off. I linked in with Joe Chawke’s open sessions in UL, met loads of people interested in the sport and joined Dooneen AC in 2017.”

What has been your best moment with the club?
“There is huge satisfaction in putting in a block of training for several months and then competing well in the Munster and All-Ireland finals. You get to compete at world class venues like Athlone I.T.

Winning a bronze medal in the 800m finals in 2020 was certainly a great moment. I enjoy the team aspect of athletics also. Getting a team together to compete in the Limerick cross country championships is always good fun.

"You do not want to let the team down and there is a strong aspect of comradeship.”

What does a typical week of training look like?
“I train six days per week. This consists of a long run, threshold work, speed development and endurance work and recovery runs.

“I would focus on strength and conditioning twice per week ,including weight training, circuits and flexibility work.”

What are your short term goals?
“This season I’d like to win medals at both Munster and National level in the over 35 age group.

“It would be great to keep the consistency going and win a few more medals when we return to competitive action.”

What are your long term goals?
“A goal of mine is to put on the Irish singlet and represent Ireland at the European and World Master Championships.

“I would like to get into coaching also and give something back to the sport and hopefully help athletes excel to the next level.”

Do you have tips or advice for other athletes?
“There are lots of other things you can do to improve your running besides just running.

“I would recommend making marginal gains in all the following areas which in turn will lead to a significant gain.

“For example you could do strides at the end of an easy run, practice your speed drills and stability work, work on flexibility, visualise yourself doing well in races and practice positive mental attitude, recover properly after training with foam rolling, massage, proper nutrition and adequate sleep to allow the body absorb intense training.

"These are skills built up over years of running and are part of the athlete’s toolbox.”

The Lisnagry native finished third in the 60m hurdles in a pb time of 8:18 in the World Indoor Series Silver meet in Ostrava in the Czech Republic last week. Well done Sarah.

Adare 10K Virtual Run
The 5K leaderboard is headed by Barry O’Callaghan with a blustering time of 15:38, followed by Mark Lenihan on 17:18 and Kevin O’Donoghue on 19:35.

Billy Lenihan leads the 10k table on 40:06 with Annette O’Reilky next on 41:49 and Mindaugas Igaris third on 42:37. To enter go to westlimerickac.ie or Myrunresults.com. This event takes place virtually over the month of February and cost of entry is E10.

She broke away from the defending Champion in the final lap, extending her lead going up the hill to win by 60 metres. In the men’s event Tom Carey on his return from the U.S. finished a credible 12th.