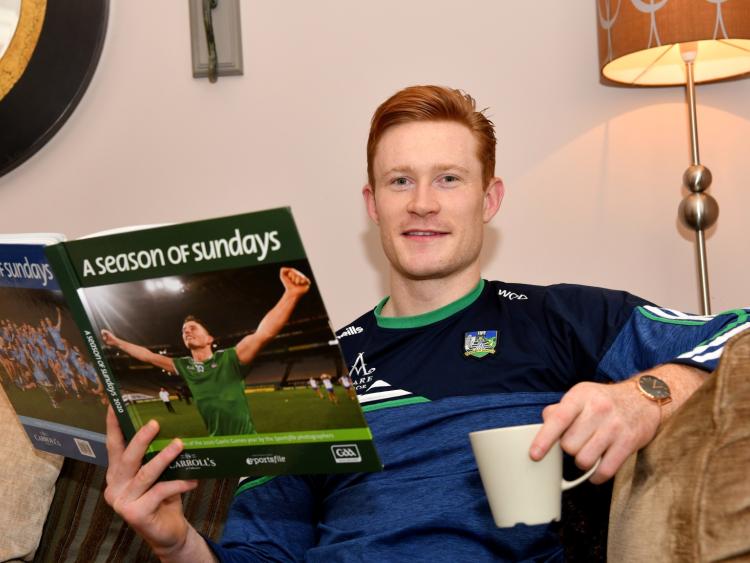 Pictured is Na Piarsaigh and Limerick Hurler William O’Donoghue at the launch of Sportsfile’s 2020 edition of A Season of Sundays.

THE GAA president, John Horan, attended a virtual launch on Monday night to officially unveil the 2020 edition of A Season of Sundays.

Over the past 24 years, the publication of Sportsfile’s A Season of Sundays has become an annual sporting tradition, marking the end of each GAA season with a stunning collection of images.

This year’s eagerly anticipated offering looks back at all the memories throughout a year like no other and is once again supported by Carroll’s of Tullamore.

The 2020 edition captures the highs and lows of an incredible GAA season with another captivating and colourful look back on a season that hung in the balance because of the Covid-19 pandemic.

While the highlights of another spectacular calendar year in the life of the GAA are expertly captured by the lenses of the Sportsfile photographers – and enhanced by Alan Milton’s perceptive captions - even they could not have envisaged the challenges that 2020 would bring to people’s lives and by extension to the activities of the GAA.

While the initial shutdown in March is expertly captured, so too is the grassroots volunteer movement that sprouted up across the wider GAA club network, underpinning a massive community effort during the first lockdown.

When training and games did return, much of the activity took place in front of small crowds or none at all and a host of new precautionary measures accompanied the staging of matches and training sessions.

On the county scene, Waterford’s march to the hurling final before Limerick’s eventual Liam MacCarthy success captivated the masses from afar while Cavan and Tipperary stole the limelight in football with their provincial final breakthrough wins before Dublin finished top of the pile to claim a sixth consecutive title.

The poignant event that was the 100-year commemoration of Bloody Sunday also features, as do a myriad of other memorable moments including Kilkenny’s camogie final victory and the latest success of the Dublin ladies footballers.

Speaking at the launch, the book’s creator Ray McManus said: “While we all knew that something was heading west we never thought it would have such an impact on Irish society and indeed on the world. I remember sitting at my desk waiting on the TV broadcast (by the Taoiseach) and trying to work out what would happen games and sports in general. That may seem somewhat selfish but it was my staff in Sportsfile I was really thinking of and how it would affect us as a group.

“Little did I know then that a hashtag used by the Press Photographers Association of Ireland would never be more relevant. #CapturingHistory is what photographers do every day and this year was probably the best example ever. In this, the 24th edition of A Season of Sundays, I believe we have captured a most extraordinary year in Gaelic games.

“When the historians or The National Museum of Ireland – specifically the Decorative Arts & History branch in Collins Barracks – look back in 100 years’ time I hope that this pictorial record of a strange year accurately reflects the 2020 GAA season.”

Uachtarán Chumann Lúthchleas Gael Seán Ó hÓráin added: “We might be a little later than normal marking the release of A Season of Sundays – through no fault of Ray McManus or Sportsfile it must be noted – but isn’t it fantastic to have a high-quality collection capturing the highs and lows of a season we thought we’d never see in our lifetime.

“I’m delighted Ray and his team waited to capture the finals and the front cover picture of Gearóid Hegarty celebrating a memorable final performance and Limerick’s win underlines the importance of the finals to the season as a whole.

“This year’s edition will doubtless be remembered for the many non-playing pictures it includes and in capturing them, Sportsfile have secured important snapshots in history. Congratulations to Ray and his team and also to Carroll’s of Tullamore for their ongoing support of this treasured publication.”

John Comerford, the chief operating officer of Carroll’s of Tullamore, said at the launch: “We are delighted to once again sponsor A Season of Sundays. There were many wonderful moments during the 2020 GAA season, despite the difficult year that it was. The book is a fantastic celebration of the unique images which were captured during the year. Our support of the GAA will continue in 2021 as we mark 30 years of sponsoring Offaly GAA.”

An ideal gift for any GAA fan, the book is available at bookstores nationwide and online at www.sportsfile.com and is priced at €27.95.