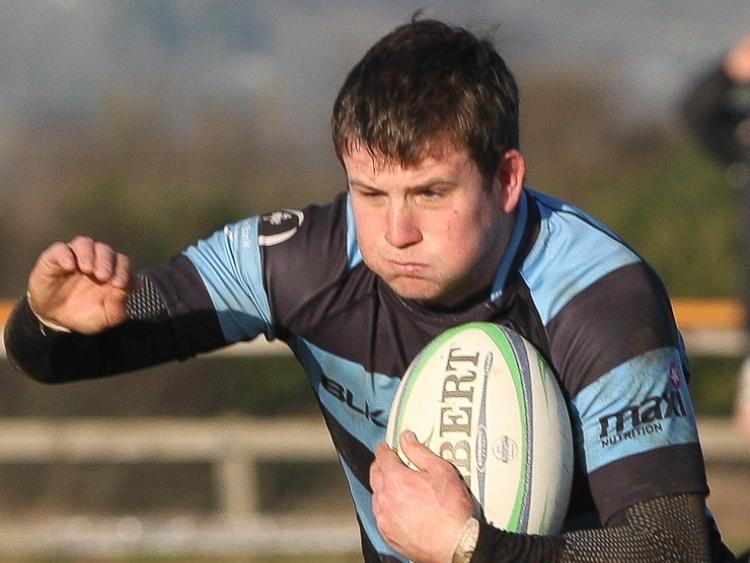 Shannon head coach Tadhg Bennett in action for 'the Parish' side

What have the last 10 months been like for a club rugby coach?

Tadhg Bennett: “The last 10 months have been very much a rollercoaster of a period with continuous highs and lows. Missing out on the chance to get promotion was a huge hit to our squad, we felt we were in a good place and in a strong position for a promotion play-off.

“Recruitment was fairly tough considering we didn't know what the year ahead held and when we did get going we had a number of bodies that didn't return due to the virus and fear of transmission, people with vulnerable people at home and people who were close contacts.

“It was a good window, however, to give some experience and game time to the new and younger players in the squad and they will benefit hugely from this exposure at this level.”

When is the last time you could hold a collective training session?

TB: “We trained on the 29th of December as a group but in pods of 15 as per guidelines.

“The last collective contact session was back on the 6th of October in preparation for Energia Community Series game against Highfield that was cancelled.”

Have your players been training on their own with fitness programmes from the club?

TB: “Yes, the squad in fairness are a dedicated bunch of lads that have maintained a reasonable level of fitness during the time periods of isolation.

“Our S&C coach has done a great job on keeping them motivated by setting them challenges. They all have running session and body weight gym sessions to be working and we distributed the gym equipment among the squad as fairly as possible.”

Have you had feedback from players on how difficult this period of no games & training has been on them, physically, mentally, etc?

TB: “Yes, some of the lads are finding it tough not being involved. It is what they have been used to for years and now they can longer do it.”

How long would your team need to be back training before you could realistically play a competitive fixture?

TB: “I would say a minimum of 3-4 weeks and a least a couple of challenge games before I would risk the players going into a competitive fixture.”

How well did you think the new Community Series competition was working in the autumn before it ceased?

TB: “I think that it was a great idea to be honest and would like to see it looked at as a pre-season competition going forward to prepare teams for the AIL. I know they have it in Leinster for years where they have a Leinster Senior League.”

How much have you missed putting on a track suit for training sessions a couple of night a week as well as playing games at weekends?

TB: “We trained throughout the Xmas period which was great to get out and meet with the lads and coaches again. So we haven't missed the training side of it much however, I really miss the game day and everything that comes it.

“The last game we played was on the 3rd of October which seems like years ago at this stage. On the plus side lads are getting a lot of time to spend with family that they otherwise might not have if they were playing.”

Would you be concerned that players will give up playing rugby as a result of the suspension due to the pandemic, seconds and thirds players as well as first team players?

TB: “Yes, 100% I think this could a huge effect on the game as a whole across the country. I have spoke to other coaches about this issue also and they echo my thoughts.

“I think for those in the latter stages of there careers that this may be a decisive factor in calling it a day. Those social rugby players may not bother to return either.

“Numbers in general I feel will decline because of it but hopefully it may have the opposite effect where lads might feel that they have had the year off that they may have always wanted and now feel it may be time to return to the sport.”

What impact has the lack of activity had on rugby clubs financially?

TB: “I think again it is going to be a huge factor. A lot of clubs will have no money coming in and are solely dependent upon fundraising efforts from volunteers within the clubs.

"There is going to little to no money available next year and running teams will be a real challenge for everyone.”

You're obviously passionate about rugby, but has the pandemic with the public health issues, impact on companies, jobs, etc, made you look at the game in a different light and with a different perspective?

TB: “It has and it hasn't, I suppose. I have a small child at home and it has been great spending time with him on weeknights and at weekends but on the other hand I do miss the buzz of the game day and being involved with a team.

“It is something that I will hope my small lad will be doing in years to come and I would love if he could come to training sessions and matches with me in the future like I did with my father.

“It has really shown us that health is everything and I think rugby can be a great way of keeping active both physically and mentally. I have always had that mentality that rugby is only a game at the end of the day and for us as amateurs that still go to work on a Monday.

“I am especially conscious of this as a coach when lads report missing training due to exams or work etc, this is their life and rugby is only second to this.”

TB: “I know that personally we are currently working hard on next year's planning already and are looking at key areas of improvement both on and off the pitch.

“We are just like everyone in terms of this year and just waiting for advice from the powers to be on instruction. I think it would be great to finish off the Munster Senior Cup and possibly the Energia Community Series if that is possible.”