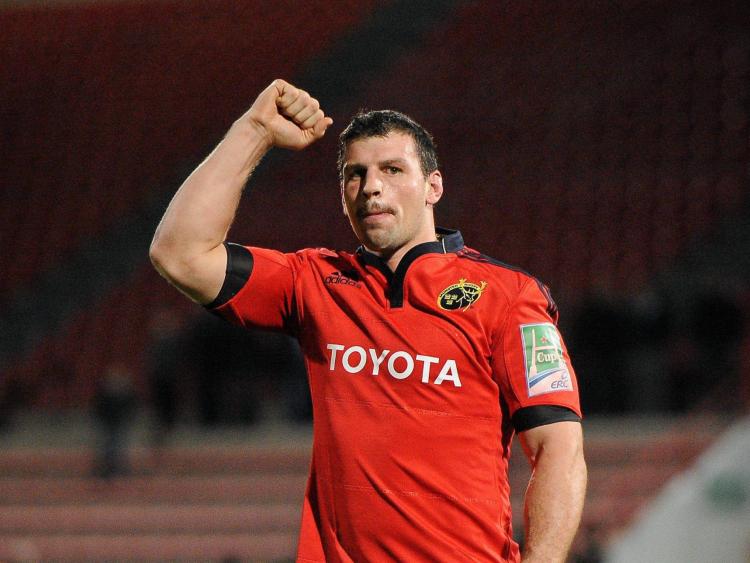 FORMER Munster star Denis Leamy has been appointed as defence coach with the Ireland U20 side.

The IRFU has also confirmed that former Shannon RFC and UL-Bohemian RFC head coach Colm Tucker remains as forwards coach with the side.

Capped 57 times by Ireland, he played in two World Cups, was twice a Triple Crown winner and was a member of the 2009 Grand Slam winning side.

Leamy has previously been part of the Young Munster coaching team following his retirement. Leamy also worked with Rockwell College, with Garryowen in the AIL and with Munster’s underage teams.

Colm Tucker is the current Elite Player Development Officer at Connacht Rugby as well as Assistant Coach with the Connacht Eagles.

Tucker previously worked as a Coach Development Officer at Connacht Rugby. Previous to joining Connacht, he was Head Coach of UL Bohemians in the Ulster Bank League for four seasons and previous to that he held the head coach position at Shannon RFC.

The Ireland Under-20 squad assembled for their first preparatory camp before Christmas under new Head Coach Kieran Campbell, who succeeds Noel McNamara and take charge for the 2021 season.

Following the announcement that the 2021 Under-20 Six Nations is to be postponed, the IRFU say they will continue to work with tournament organisers on confirming a fixture schedule as soon as is practicable. The IRFU is committed to the safety of its players, all participating teams and everyone in our community.

Speaking about the announcement, IRFU Head of Elite Player Development, Peter Smyth said: "Following today's announcement, we have begun discussions with our playing and management teams to formulate a new season plan for this age-grade.

"Meetings are already being scheduled with the other five Unions to examine windows and options to play these set of fixtures at another point in time within the remainder of the season. The health and wellbeing of all players, management and participating stakeholders is the number one priority and through the Provincial Academies, we will continue to assist and prepare players for a return to rugby."

Kieran Campbell, the Ulster Academy Manager, had been Assistant Coach under Noel McNamara for the last three seasons, including the memorable 2019 Grand Slam-winning campaign, and brings a wealth of experience to the role.

"The postponement of the Six Nations is disappointing for the players, coaches and management, however the most important thing is people's health and we fully understand and support the decision," Campbell commented today. "We must all follow public health advice and the guidelines in place to protect our families and communities.

"The IRFU will explore the options and formats for the Championship to take place at a later date with Six Nations and the other Unions and we've been fortunate to have delivered one camp before Christmas. We were able to build a foundation of work through that camp and through remote video calls with the players in recent weeks.

"With this body of work completed and our commitment to exposing players to competitive game-time within the current restrictions - including the 'A' fixture between Ulster and Leinster this Friday - players, coaches and management will be striving to ensure the group is prepared to perform for the 2021 Championship at a later date."