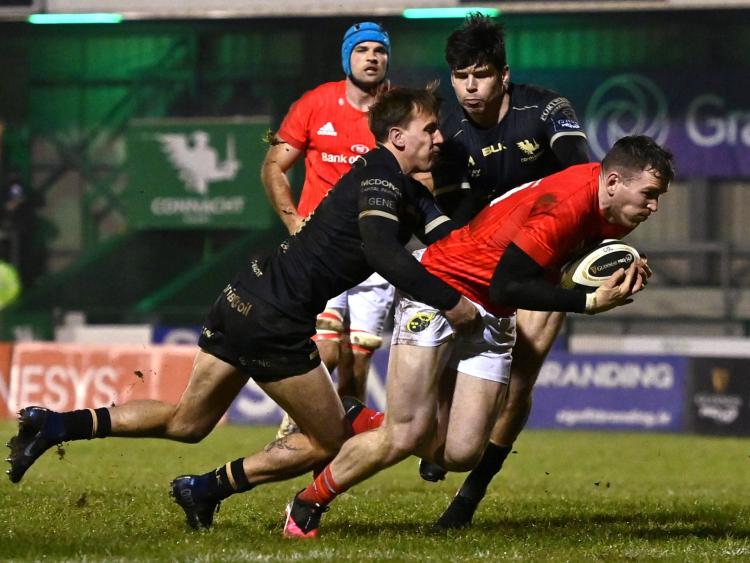 PHEW! What drama. Resilient Munster cemented their position at the top of Conference B of the Guinness PRO14 after scoring a nail-biting 16-10 derby victory over Connacht at the Sportsground on Saturday night.

Munster looked to have the game in safe-keeping when leading 16-3 after 77 minutes. However, a dramatic converted try from Connacht and two Munster sin-binnings left the game up for grabs as the clocked ticked into the red zone.

Connacht had an opportunity to sneak the most unlikely of wins when awarded a last gasp penalty deep inside the Munster '22. The home side opted to keep it tight, despite having a two-man advantage. A timely intervention from Man of the Match  Tadhg Beirne which forced a Connacht knock-on close to Munster's tryline ultimately turned the outcome in their favour.

A strong Munster line-up, including their returning Ireland internationals, had looked set for a far more comfortable win in this top-of-the-table clash in Galway after those drama-filled final minutes.

A first half try from centre Chris Farrell proved a crucial score as Munster ultimately made it six wins on the bounce against Connacht.

While Farrell struck for the game's opening try in the 18th minute, out-half JJ Hanrahan added 11 points with the boot as Munster got back to winning ways after an experimental side suffered defeat to Ulster in Belfast seven days earlier.

Capping off a superb start to the match for @Munsterrugby

Munster, who have won eight of their nine PRO14 fixtures this season, bossed the breakdown throughout where Johann van Graan's charges won several key turnover penalties.

Their visitors used their powerful driving maul to telling effect, making big yardage with it, especially in the opening half after which they held a useful 10-3 advantage.

Munster enjoyed a significant let-off in the fourth minute when Jack Carty was off target with a very kickable penalty attempt after JJ Hanrahan was penalised for not releasing after making a tackle inside his own '22.

Became came Munster in the greasy wet, freezing conditions and following an excellent driving maul which made decent yardage, the home side was penalised on their own '22. Hanrahan duly landed the award for a 3-0 advantage, while Connacht's Shane Delahunt was yellow carded for pulling down the maul.

Extending the @munsterrugby lead, @jjhanrahan makes no mistake with the penalty

Can @connachtrugby fight back late on?

Munster made the most of their numerical advantage when scoring the game's opening try in the 19th minute. James Cronin helped earn the field position when winning a turnover penalty.

The visitors used their excellent driving maul to great effect to make yardage. Munster used their forwards to carry the ball deep inside the home side's '22 before centre Chris Farrell barged over from close range.

Hanrahan added the conversion as Munster racked up 10 points while Delahunt was off the pitch.

Connacht did manage to make some inroads into Munster's advantage in first half stoppage time when the visitors were penalised at scrum-time and and Carty made no mistake for 3-10 at the interval.

Munster hit the ground running at the start of the second half when Hanrahan landed his second penalty of the contest in the 43rd minute.

The visitors added to their lead just after the hour mark when, following a passage of excellent rugby, ignited by a well-executed strike play, Munster forced another penalty and Hanrahan again dissected the posts for 16-3.

It was Hanrahan's final act in the game as he was then replaced by Ben Healy in the play-maker role.

Connacht did manage a consolation try late on when Peter Sullivan dotted down in the corner in the 79th minute after Munster had lost replacement Rory Scannell to a yellow card.

In a drama-filled closing to the game Jack Carty found Dillane with a pinpoint crossfield kick and it took some excellent cover defence to prevent Sullivan from getting over again.

First blood to @Munsterrugby at The Sportsground! @jjhanrahan strikes the penalty sweetly to give the visitors an early advantage

Munster were down to 13 players when McCarthy was yellow-carded as the clock ticked into the red.

Connacht opted for a scrum off the penalty as Munster were down to 13 players. A terrific intervention from Tadhg Beirne forced a knock-on from the home side while within touching distance of the tryline.

Munster held on for a dramatic success.