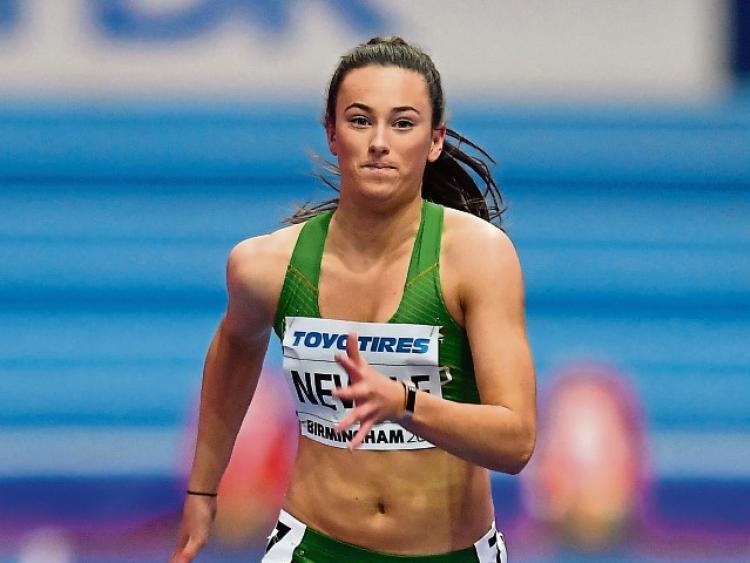 2020 - what a year! A year everyone wants to see the back of. Who would have thought that the National Indoor Championships on the 1st March, 2020 would be pretty much my first and last race of the year?

A year where athletics and sport in general paled into insignificance with all that was going on around us. A year where one by one major sports events were cancelled or postponed.

On a personal level the year started brightly winning the aforementioned National Indoor Championships for my second time in an equal personal best time of 7.30 seconds. A win and time that propelled me into an Olympic qualifying position.

Then just as quickly we were thrown into lockdown and all competition and training cancelled. No more training with my Emerald AC group, where everyone pushed each other to run faster, to lift heavier and more importantly to motivate whatever the weather or mood.

For the next three months I found myself training with my sister Aoife on the green in front of my house or in a nearby park and doing weight training on the patio, while the weekly Yoga session was done over Zoom.

Finally towards the middle of June I was allowed back onto the track in UL and training restarted in earnest. The National Championships was rescheduled for July but unfortunately a foot injury which I picked up running on the uneven grass surface during lockdown proved more serious than I thought and led to eight weeks of inactivity.

Swimming and gym only and no chance of retaining my national 100m title. Just when I thought everything was back to normal my season was over before it began.

The hard preseason training usually begins in September but for me because of my inactivity it began earlier than normal and on my own with my coach Noelle Morrissey keeping a watchful eye.

So the hills, fartlek and endurance training that we normally do as a group were all mine! I was glad to see my training group return after a few weeks so we could all share the pain together.

Thankfully training has continued as normal, six days a week, during the most recent lockdowns with track and gym access allowed by UL. Training for the Irish relay team has also resumed in Dublin whilst following guidelines laid down by the Government for elite athletes.

So to 2021 and what’s in store. The postponement of a number of competitions from 2020 has led to a number of major European and World competitions being rescheduled for 2021. That being said the World Indoor Championships which were set to take place in Nanjing China in March have already been cancelled due to the Covid-19 pandemic.

I am currently in a qualifying position for the games (50th in the world rankings), but with only the top 56 to qualify and qualifying ending on the 30th June 2021, its going to be an important few months of racing with every one hundredth of a second potentially gaining me valuable ranking points.

However, given the unstable position with the Covid-19 virus at the moment it’s difficult to say if some or indeed any of the above competitions will take place.

Added to this is the uncertainty around competitions taking place in Ireland and mainland Europe while racing goes ahead in the Southern Hemisphere getting their athletes a head start in the quest for elusive Olympic qualifying points.

It’s frustrating at present not to have any upcoming races in Ireland whilst other sports continue to compete at National level.

However, Athletics Ireland have recently announced that the National Indoor Championship will take place in February next year subject to government guidelines at that time.

Let’s hope that 2021 brings a return to normality for everyone. Happy New Year and stay safe.

Limerick City and County Council last week announced that work is to begin on a 3 Million Euro Regional Athletics Hub in Newcastle West which is to be finished by autumn 2021.

The hub on the Cork Road will include construction of a running track to World Athletics standards with floodlights plus associated facilities and disability access. Well done to all involved who helped to make it happen.

Preview is available on the West Limerick AC Facebook page.

Other Virtual Runs
Entry is also open for the Milford Hospice 10K Virtual Run to be held on weekend of the 28th and 29th January. Early bird entry is just €15.

Well done to all who ran the Goal Mile, the Great Limerick Virtual Challenge, #notparkrun and other events the past week.

10 years ago
In a time of 27:36 Mike Yelverton (West Limerick) was a clear winner of the Country Club New Year’s Day 5 Mile. He was followed in second by Mike Cunningham (Bilboa) in 28:06 with Mike O’Brien (West Limerick) completing the podium taking third in 28:26.

Graham Prendergast (Country Club) was fourth in 28:38 with Joe Chawke fifth in 31:27.
Deirdre Finn (Bilboa) was the women’s winner in 34:19 followed in second by Aideen Downes (Sportsworld Dublin) in 36:36 and Sharon Goldsmith (Country Club) third in 39:12.