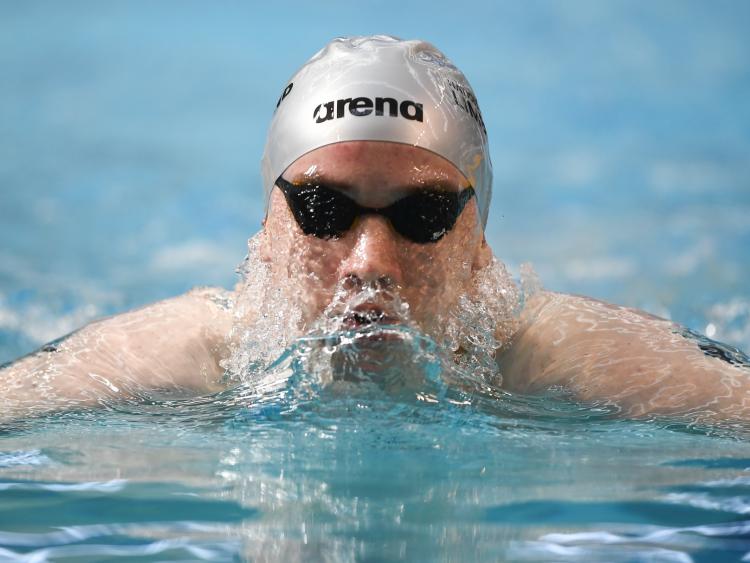 "I think I had probably one of my best training blocks coming up to this, It was definitely one of my hardest, and we came in tapered for this, so it’s good to see the results now," said the Clarina 18 year old.

"I started off the comp well, I got a nice junior record in the 50m Breaststroke. I was really happy with that, so I just tried to carry that confidence through to my swims in the mornings and evenings. I kinda learnt this morning in the 200m Breaststroke to focus on stroke count and stroke length and efficiency. I tried to apply that then this evening, and that helped, and I got the Irish Junior Record. I was probably most happy with the 50m, to see that move on; half a second in 50 is a lot. And I was happy with the 100m IM and 200m IM - I was very pleased with that," outlined Corby.

All started on Thursday when Corby, who set a new junior standard in the 50m Breaststroke. Corby broke his own record of 28.33 in 27.76, finishing ahead of Dublin’s Darragh Greene in 27.81.

Corby had set the old record of 55.10 as last year’s Irish Short Course Championships and bettered the time by .34 touching in 54.76.

On Saturday another two records followed.

In the 200m Breaststroke Corby was second in 2:13.24, but good enough to break his own Irish Junior Record in the process, making it a third junior record of the weekend for the 18-year-old who had a previous best of 2:13.35 from 2019.

Corby returned to the pool later on Saturday evening for his fourth junior record, this time in the 200m Individual Medley where he broke Brendan Hyland’s 2013 record of 2:05.77 in 2:04.61.

National Performance Director Jon Rudd said "It won't be a surprise to anyone to hear me say that 2020 has been a challenging year for our sport, our athletes and all of the aquatics community. But our Performance athletes have stepped up at this meet despite all of the difficulties, the uncertainty and the disruption that they have experienced in the last 10 months. We would have loved to have accommodated our usual contingent of athletes over these three days, but we also have to say that we are delighted to be able to run something for this discrete number of identified athletes as we progress into the Olympic year.

Rudd continued: "To have five Senior and four Junior National records broken (all by Corby), not only short course but long course too at this meet is a real testament to the resilience and steel of some of these athletes - and their coaches - and we can enter 2021 with a new confidence and conviction that Irish swimming continues to make the kind of strides we both want and need".