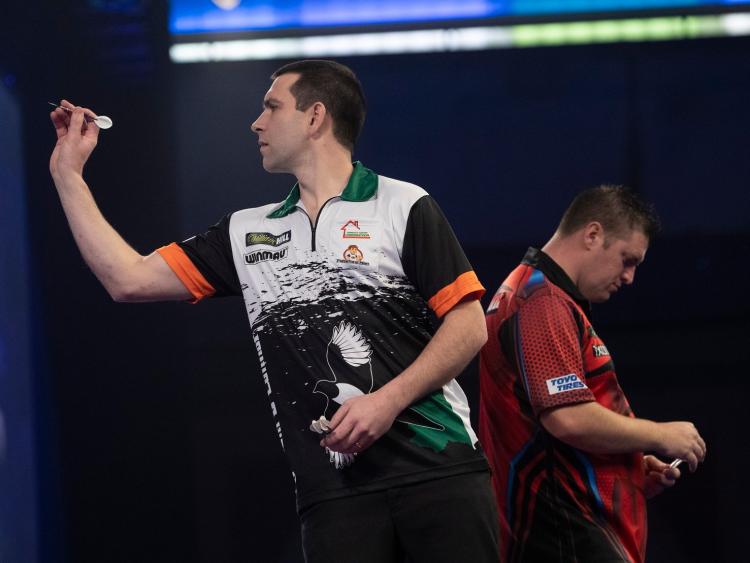 Cappamore man O'Connor rallied strongly from losing the opening two sets of the high quality match at the 'Ally Pally' to level the best of five set match at 2-2.

However, world ranked number 11 Gurney prevailed in the deciding set to advance to the third round of the Championships which take place after Christmas.

Thirty four-year-old O'Connor, nicknamed 'The Magpie' had defeated Niels Zonneveld, of the Netherlands, in the opening round on Wednesday to set up his meeting with Gurney.

Gurney looked on course for the performance of the tournament so far with an average well over 100 as he took the opening two sets for the loss of just one leg.

Willie O'Connor had put his darts away there but he's well back in this match as he steals the third set!

However, a resilient O'Connor, appearing in the World Championships for a fourth time then capitalised on four missed match darts from Gurney to claim the third set.

World ranked number 36 player O'Connor was growing in confidence, and took out a 122 finish on his way to winning set four to take the contest the distance.

O'Connor is oozing confidence now as he pins D16 for a 122 finish and he's on the brink of levelling the match! pic.twitter.com/b3DGq1vQ2f

However, Gurney turned the tide back in his favour with a break of throw in the first leg of the deciding set, which he wrapped up 3-0 to book his place in round two where he will face Chris Dobey.

Daryl Gurney averages 99 there as he shows glimpses of recapturing his fantastic form with a hard-fought 3-2 victory over William O'Connor! pic.twitter.com/VD17ao3bZf