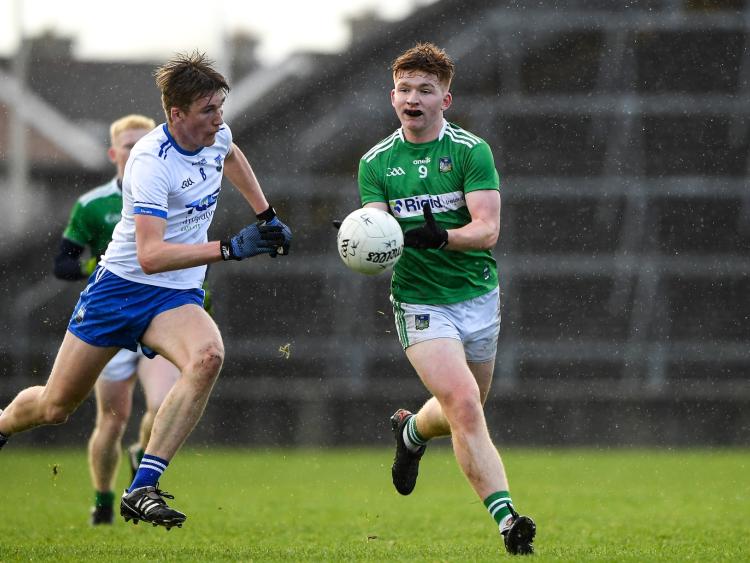 THE LIMERICK minor footballers ensured first blood this weekend against Waterford with victory in the Munster MFC.

The final score in his provincial quarter final tie was Limerick 2-12 Waterford 1-5 in the LIT Gaelic Grounds.

The Joe Lee managed Limerick U17 side now play Clare or Tipperary in the Munster minor football championship semi final next Wednesday December 16 at 7pm.

The all-important goal was the last kick of the opening 30-minutes. David O'Shaughnessy was brought down and he calmly stepped forward to take the resulting penalty and coolly placed the ball low to the goalkeeper's right to give Limerick breathing space at the break.

The sides were level once in the opening half - at the first half water break on 17-minutes at 0-3 each.

Limerick started and finished the half on top.

Limerick lost full back Frank Corcoran to an early injury but O'Shaughnessy (free) and Darragh Bridgeman had the teenagers in green two points ahead before Waterford opened their account in the ninth minute.

The visitors to the LIT Gaelic Grounds didn't score from play in the opening half and were soon 0-3 to 0-1 down when O'Shaughnessy lofted over a delightful lineball.

After the water break Limerick powered towards half time with four unanswered scores.

Ciaran O'Sullivan and Gary Sheehan had fine points from play before the late penalty ensured a six point lead for the home side at the interval.

There were two goals inside the opening three minutes of the second half - both palmed to the net.

Just 90-seconds in the second half came the first Waterford score from play in the game - Sam Pender getting a hand to a Fionn Hallahan delivery to divert to the net.

The Limerick response was instant.

First Padhraic McMahon kicked a fine point and then James Killian had a goal when he palmed to the net after O'Shaughnessy passed across the goal.

That left it Limerick 2-7 Waterford 1-3 after a quick-fire run of scores in the opening minutes of the new half.

The scores then dried up.

Seven minutes into the second half came the first and Waterford point from play but when substitute Oisin Enright scored with his first touch, Limerick were 2-9 to 1-4 clear by the second half water break.

Limerick finished out the game with the final three scores with Paddy Kennedy and McMahon on the mark from play.