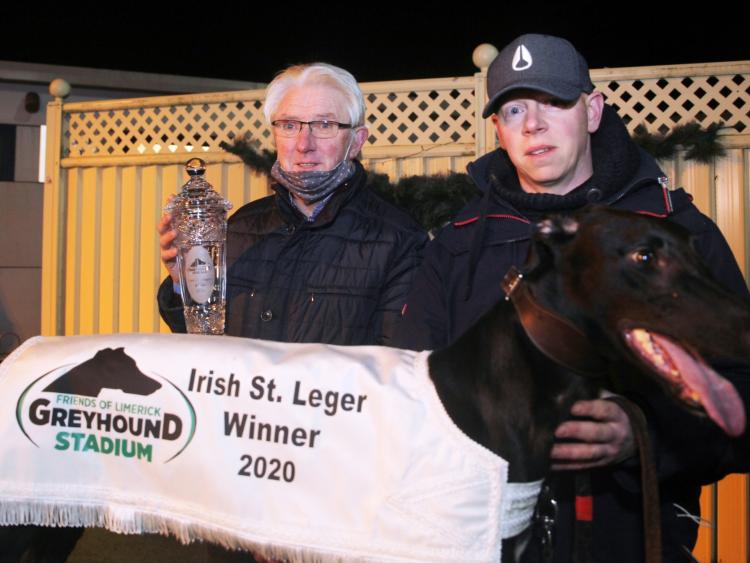 Sponsored by the Friends of Limerick, the Limerick Classic goes to the Co Carlow based trainer Thomas O’Donovan.

The Gerard Hutton owned Epic Hero won in 29.44 for the 550 in Limerick Greyhound Stadium.

Beaten a length into second in the semi final the previous week by Cash Ready, Epic Hero turned the tables to lead home Cash

Ready for trainer Denis Fitzgerald and the Shane Cunningham and the Cash Ready syndicate.

Epic Hero was sent off at 5/1 from trap two.

The hottest of favourites was Ballymac Wild, who had to settle for a fifth place finish on the night

Elsewhere on the night, Liam Dowling did win the consolation final – Ballymac Kingdom winning in 29.68 and by half a length. Second was NewInn Hero for Graham Holland owners Simon Taylor and Marc White, while in third was OutNumbered for Mark O’Donovan and owners Bernadette Diskin Holian and Basil Holian.

There were also a number of other top races on the card in Limerick last Saturday.

Fresh from winning the English Derby Plate Doolin Duke returned to Limerick in an Open 600 and was successful for Pat Buckley and Kenny Glen.
The winner’s time was 32.46. Just beaten into second was Springwood Vardy for Denis McCarthy.

A Limerick and Clare GOBA A3 525 final had €2,100 on offer for the winner and Redzer Regera obliged for Pat Reddan. The winning time was 28.71. Second, a length and a half back, was Bellagors Rebel for Stephen Clack, while in third was Ballintubber Cain for Michael O’Regan.

Bright Blake for Paul Hennessy and Mary Lynch won the Deerjet Sydney English Derby Champions ON2.
In 28.96 the winner had two lengths to spare on the line.
Second was Sugan Snowey for Mary and Anthony Cusack.

The night opened with an A3 525 – won in 28.58 by Safe Record for John Franklin. The winner had 12 lengths to spare on the line. Back in second was Cherrygrove Snow for John Murphy.
Kiltymon Pearl won a D750 for Paul Hennessy and the Maidens Voyage syndicate. Again there was 12 lengths between first and second with the winner’s time 41.89. Second was Group Hercules for Paul Hanley.

Sean Stack and the Rallying Racing syndicate won with Rallying Joy in an A1 525. The winning time of 28.99 ensured a length and a half victory. Second was Corgigg Toby for Pat Buckley and owner Edel Moroney.

The Cormac Davern owned Mohane Vicky won an Open 350. The winner had two and a half lengths to spare after a run of 18.78. Beaten into second was Gone To Ground for Denise Ryan.

And, in the very next race Davern had a double success – Mohane Rosa winning an Open 525. In 28.75 the winner’s margin on the line was a length and a half. Second was Loxley for Sean Stack.

The Graham Holland trained Native Maestro won another Open 525. The John Kelleher owned winner had five lengths to spare on the line after a time of 28.42. Second was Ballycowen John for Denis Fitzgerald and the Harpur O’Brien syndicate in a race that saw Pat Buckey’s Glengar Bale not feature.

The final race of the night was an A3 575 – won in 32.06 by Slipalong Fly for Patrick and Eric O’Connor. Just beaten into second was Gurtnacrehy Kyra for James Kelly.